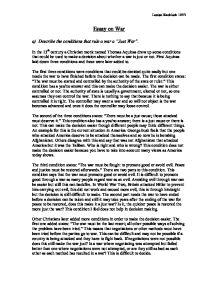 Describe the conditions that rule a war a &quot;Just War&quot;.

Essay on War a) Describe the conditions that rule a war a "Just War". In the 13th century a Christian monk named Thomas Aquinas drew up some conditions that could be used to make a decision about whether a war is just or not. First Aquinas laid down three conditions and these were later added to. The first three conditions were conditions that could be decided quite easily but one needs the war to have finished before the decision can be made. The first condition states: "The war must be started and controlled by the authority of the state or ruler." This condition has a yes/no answer and this can make the decision easier. The war is either controlled or not. The authority of state is usually a government, elected or not, so one assumes they can control the war. There is nothing to say that because it is being controlled it is right. The controller may want a war and so will not object is the war becomes advanced and once it does the controller may loose control. The second of the three conditions states: "There must be a just cause; those attacked must deserve it." This condition also has a yes/no answer; there is a just cause or there is not. This can make the decision easier though different people may think different things. ...read more.

This is difficult to decide. The second states: "There must be 'proportionality' in the way the war is fought." Proportionality is where no civilians are killed and only enough force is used in order to gain victory. This is difficult as accidents happen and the war may fulfil all the other criteria but because some civilians were killed the war may be declared unjust. This one leaves it up to the person making the decision to what they think is more important. Some believe no civilians should be killed where as others believe that some may get killed as it is war. The third states: "The good gained by the victory must be greater than the evil which led to the war." This condition requires the war to have ended before a decision can be taken. Evil and good is very difficult to weigh up and so this condition may not make it any easier for a decision to be made. b) Why do some Christians believe that fighting a war can never be right? A pacifist is someone who believes that all war is wrong and who would refuse to participate in any fighting. Among Christian denominations the Quakers are the group most associated with pacifism. Christians look to The Ten Commandments and see that they say, "Do not murder". ...read more.

Anger can lead to the need for revenge and a lot of the wars in history have started because people have wanted revenge on countries or individuals, today's situation in America is an example of this. In Matthew 5:38-48 Jesus talks about revenge and love of enemies. In this Jesus went beyond the strict letter of the Old Testament law and many priests felt uneasy about applying 'an eye for an eye' literally, preferring it relating to compensation and not injury. Jesus based the command on Leviticus 19:18 "love one another....". Hating the enemy was not part of a Christian teaching but was a common human failing. Jesus goes further than this and tells us to love offenders and that this power should make them good. This relates to America as George Bush is taking out revenge on Afghanistan though Jesus says not to do this. Jesus believes we should leave punishment up to God and also we should love the offenders as this may make them good. The final teaching I base my decision on can be found in Leviticus. "Do not take revenge on anyone or continue to hate him, but love your neighbour as you love yourself." (Leviticus 19:18). Here Jesus shows that you should forgive people and not continue to hate them. This can lead to war and Jesus preventing this can prevent war and this is what convinces me that Jesus was a pacifist. Louise Blacklock 10V3 ...read more.