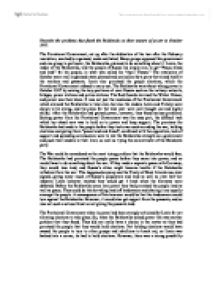 Describe the problems that faced the Bolsheviks on their seizure of power in October 1917.

Describe the problems that faced the Bolsheviks on their seizure of power in October 1917. The Provisional Government, set up after the abdication of the tsar after the February revolution, was badly organised, weak and hated. Many groups opposed this government and one group in particular, the Bolsheviks, planned to do something about it. Lenin, the leader of the Bolsheviks, told the people of Russia his simple aim, to get "Peace, bread and land" for his people, in what was called his "April Theses." The revolution of October was a well organised event planned and carried out by a party that aimed itself at the workers and peasants. Lenin also promised the people elections, which the Provisional Government refused to carry out. The Bolsheviks went about taking power in October 1917 by seizing the key positions all over Russia such as the railway network, bridges, power stations and police stations. The Red Guards stormed the Winter Palace, and power was then taken. It was not just the weakness of the Provisional Government which allowed the Bolsheviks to take over, but also the leaders Lenin and Trotsky were shown to be strong, and the plans for the take over were well thought out and highly skilful. After the Bolsheviks had gained power, however, they faced serious problems. ...read more.

As Lenin guessed, the election results showed that the Bolsheviks had lost and the Social Revolutionaries had won the vote and so a Constituent Assembly was set up. Lenin dealt with this threat by condemning the assembly as an instrument of the Bourgeoisie and dissolving it, and replacing it with the All Russian Congress of Soviets, which was influenced by the Bolsheviks. Widespread opposition from many different groups was another problem the Bolsheviks had to face, as the Bolsheviks regime was unpopular amongst them, and strongly opposed. The Bolsheviks could have tried to compromise with the groups and joined together in a coalition but this would've been almost impossible as the views of each party were very different. Dissolving the Constituent Assembly was the first blow to the opposition, as it deprived them of a valuable platform. They also restricted other party's newspapers and removed the vote from the middle non-Bolshevik classes, and used terror and violence to control the opposition. Finally, by 1921, they had banned all opposing parties, which was rather dictatorial, but all the same helped the Bolsheviks. Civil war was also a great problem that the Bolsheviks faced, as opposition was surely going to create this sooner or later. Withdrawal from the war helped this however because they could then use the money and goods from that to prepare for civil war. ...read more.

power, promise of "peace, land and bread" which would cause problems which ever way it was dealt with, and the commitment to Marxism all presented problems for the Bolshevik party. I personally would say that the War was the most important, followed closely by the opposition to the party. The decision that Lenin made about the war would make or break Bolshevism in Russia, so it was a very important problem. Making a separate peace with Germany would result in appearing to be weak to other countries, and also the allies would become hostile. Not ending the war and continuing, as the Tsarists and Provisional Government supporters wanted, would cause even more serious damage to Russia, so this wasn't really an option open to Lenin. Going with Trotsky's policy of "neither peace nor war" could result in more serious consequences for Russia, so in the eyes of Lenin, the only thing to do was to sign the Treaty of Brest Litovsk, and this is what he did after persuading the other Bolshevik leaders. The skilful planning and organisation of the Bolsheviks, aiming propaganda at the peasants, and having strong, decisive leaders were advantages that the Bolsheviks had when they overthrew the Provisional Government. Where other groups would have most likely failed when faced with so many difficult problems, the Bolsheviks pulled through because of these advantages, and remained strong and in power throughout Russia. ...read more.