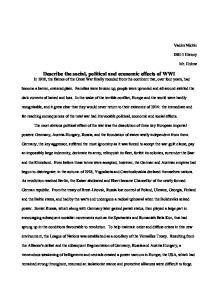 Describe the social, political and economic effects of WWI

Vadim Nikitin IBH-1 History Mr. Hulme Describe the social, political and economic effects of WWI In 1918, the flames of the Great War finally receded from the continent that, over four years, had become a barren, cratered plain. Families were broken up, people were uprooted and all around swirled the dark currents of hatred and loss. In the wake of the terrible conflict, Europe and the world were hardly recognisable, and it grew clear that they would never return to their existence of 1914: the immediate and far-reaching consequences of the total war had irrevocable political, economic and social effects. The most obvious political effect of the war was the dissolution of three key European imperial powers: Germany, Austria-Hungary, Russia, and the foundation of states newly independent from them. Germany, the key aggressor, suffered the most ignominy as it was forced to accept the war guilt clause, pay an impossibly large indemnity, decimate its army, relinquish its fleet, forfeit its colonies, surrender the Saar and the Rhineland. ...read more.

This yearning for security manifested itself economically and was especially evident in the Danube valley. Finding themselves without the labour and capital that had previously come from Germany, and fearing for their safety, the successor states instituted protective export and import tariffs not observed in the Europe of half a decade ago. Another element of the post-war continental economies was growing currency instability that occurred as their gold reserves rapidly and unevenly flowed to the USA in debt payments. Inflation, too, was universal, but particularly plagued Germany, which was printing much money at the time, Austria and Hungary, where the League of Nations intervened economically, and Poland and Russia. Much needed stabilisation came with US loans to Germany from 1924, as capital once again began to flow to Europe and growth reappeared. Immediately after the war, however, economic destitution in Europe was comprehensive. Primarily, resources were depleted; most of the workforce was killed, factories and farms were destroyed, little capital was available and shortages were ubiquitous (except for the USA, which improved economically during the war). ...read more.

Germany found this strategy especially successful, even in alleviating the acute post-war problem of low birth rates and poor population growth, with the help of the abolition of contraceptives and abortions. The slow population growth was another social indicator of the depression and insecurity felt in most European countries for many years after 1918. These feelings were realistic, as society's landscape was bleak at the time: Families were torn as thousands of women and children became widows and orphans; because of bombings, numerous people lost their homes and were displaced but were often provided with neither shelter nor welfare. In general, the social ramifications of WWI were mixed. World War One, the war that should have ended all wars, was the most terrifying and large-scale confrontation the old world had experienced. As it ploughed through European cities and countryside, it slaughtered people and animals in cold blood, razing settlements to the ground and bringing industry to its knees. The social, political and economic effects of the first world war were so historically influential that they have not only defined the immediate future, but continue to shape our present existence. ...read more.