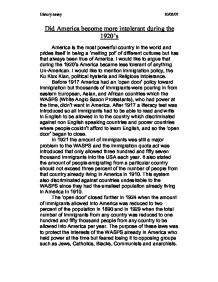 Did America become more intolerant during the 1920's.

Did America become more intolerant during the 1920's America is the most powerful country in the world and prides itself in being a 'melting pot' of different cultures but has that always been true of America. I would like to argue that during the 1920's America became less tolerant of anything Un-American. I would like to mention immigration policy, the Ku Klux Klan, political hysteria and Religious intolerance. Before 1917 America had an 'open door' policy toward immigration but thousands of immigrants were pouring in from eastern European, Asian, and African countries which the WASPS (White Anglo Saxon Protestants), who had power at the time, didn't want in America. After 1917 a literacy test was introduced so all immigrants had to be able to read and write in English to be allowed in to the country which discriminated against non English speaking countries and poorer countries where people couldn't afford to learn English, and so the 'open door' began to close. In 1921 the amount of immigrants was still a major problem to the WASPS and the immigration quota act was introduced that only allowed three hundred and fifty seven thousand immigrants into the USA each year. It also stated the amount of people emigrating from a particular country should not exceed three percent of the number of people from that country already living in America in 1910. ...read more.

Communism and anarchy were feared so as: communist and anarchist extremists were seen to arrange trade union demonstrations which were described by the papers as communist demonstrations, an anarchist shot president McKinley dead twenty years previously, Russia had become a communist country in 1917 and the Palmer incident of 1920. In June 1920 an unidentified man left a bomb outside the house of the attorney general, A Mitchell Palmer which resulted in the death of the bomber. The attack was presumed to be a communist assassination attempt due to a copy of a communist newspaper being found in the vicinity of the blast, which may have been discarded there innocently or planted by Palmer to use the attack to stir up hatred for communists who were regarded as a threat to the American constitution and the WASPS in general. The attack resulted in A Mitchell Palmer heading raids on communists and anarchists that resulted in six thousand arrests and only two prosecutions for firearms offences. Another cause of political intolerance in the 1920's was the case of Sacco and Vanzetti. Sacco and Vanzetti were charged with a wages robbery in which two guards were shot dead. Sacco and Vanzetti were both recent immigrants from Italy, neither spoke very good English, both were carrying loaded guns when arrested (although this is no crime in the USA even today) ...read more.

In Dayton, Tennessee two teachers, Johnny Scopes and his college decided to put the new law to test and for Johnny Scopes to teach the theory of evolution to his class and his college to sue him for breach of the law. Johnny Scopes taught his class the theory of evolution and was subsequently arrested and put on trial. The two sides hijacked the trial and it became Christian fundamentalism on trail rather than Johnny Scopes. Benefactors from both sides of the argument hired two of the best lawyers in America to fight the 'Monkey trial' (as the press called it). During the trial the defence lawyer questioned the prosecution lawyer on flaws in the biblical theory he couldn't explain to which the prosecution lawyer replied, "I am not satisfied by any evidence I have seen." The questioning continued like this until the press began making fun of the prosecution lawyer and the judge put a stop to it. Johnny Scopes was found guilty of breaking the law and fined one hundred dollars. These are the main reasons for which I believe the United States of America was becoming more intolerant during the 1920's. I particularly believe the American immigration policy, the Ku Klux Klan and the Red Scare contributed greatly to the views of many Americans and all the intolerance was down to the selfishness of the WASPS who wanted to protect their own supremacy, wealth, beliefs and interests. History essay 10/05/07 ...read more.