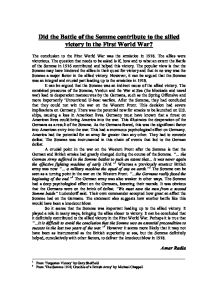 Did the Battle of the Somme contribute to the allied victory in the First World War?

This illustrates the desperation of the Germans as a result of the Somme. As the Germans feared, this was the significant factor into American entry into the war. This had a enormous psychological effect on Germany. America had the potential for an army far greater than any other. They had to concede defeat. The Somme was instrumental in this chain of events that led to the German defeat. A crucial point in the war on the Western Front after the Somme is that the German and British armies had greatly changed during the course of the Somme. "... the German Army suffered in the Somme battles to such an extent that... it was never again the effective fighting machine of early 1916."1 Whereas a previously amateur British army was now "... ...read more.