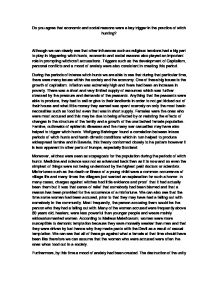 Do you agree that economic and social reasons were a key trigger in the practice of witch hunting?

Do you agree that economic and social reasons were a key trigger in the practice of witch hunting? Although we can clearly see that other influences such as religious tensions had a big part to play in triggerring witch hunts, economic and social reasons also played an important role in prompting witchcraft accusations. Triggers such as the development of Capitalism, personal conflicts and a mood of anxiety were also consistent in creating this period. During the periods of intense witch hunts we are able to see that during that particular time, there were many issues within the society and the economy. One of these big issues is the growth of capitalism. Inflation was extremely high and there had been an increase in poverty. There was a short and very limited supply of resources which was further stressed by the pressure and demands of the peasants. Anything that the peasants were able to produce, they had to sell or give to their landlords in order to not get kicked ...read more.

Misfortunes such as the death or illness of a young child were a common occurrence of village life and many times the villagers just wanted an explanation for such a horror. In many cases, charges against witches had little evidence and proof that it had actually been them but it was that sense of relief that somebody had been blamed and that a reason has been provided for the occurrence of a misfortune. We can also see that the time some women had been accused, prior to that they may have had a falling out with somebody in the community. Most frequently, the person accusing them would be the person who they had a falling out with. Many of the women accused were frequently above 50 years old, healers, were less powerful than younger people and weere mainly widows/unmarried women. According to Malleus Maleficarum, women were more susceptible to demonic temptation because they were moraally weaker than men and that they were driven by lust hence why they made pacts with the Devil as a result of sexual temptation. ...read more.

For a population that originally believed in the fixed orer of the cosmos, the transformation of every aspect of their lives and being told that what they had originally believed in was a lie was too much for them to take in all at once. This produced the mood of gloom and sadness and an uncertainty of the new world. Convinced tha the Devil was on the loose, those who were part of the elite easily came to the conclusion that the easiest way to counteract this was to stop those who had made pacts with Satan. This helped to turn both the elite and peasant's attention away from the actual problems at the time to a means of resolvement and therefore a momentary sense of relief and that society had been restored. By conducting witch hunts they could temporarily heal society by focusing the attention of the entire community onto a common enemy ; the witches. Overall, it can be said that social and economic factors were indeed the key triggers of the witch hunts. ...read more.