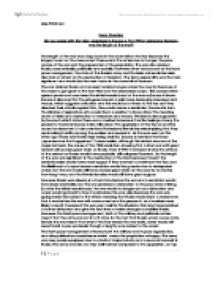 Do you agree that Tsardom was destroyed by the length of the war?

Essay Question Do you agree with the view, expressed in Source 6, that 'What destroyed Tsardom was the length of the war'? The length of the war was a big factor in the downfall on the Tsar because the longer it went on the more unrest there was in the cities due to hunger, the poor course of the war and the persecution of the population. The war also drained Russia, economically, politically and socially. However other factors such as the Tsar's poor management, the state of the Russian army and Professional revolutionaries also had an effect on the destruction of Tsardom. The Tsar's personality was the most significant and would be the main factor in the downfall of Tsardom. The war drained Russia and caused massive hunger across the country because of the need to get grain to the front-line and the decreased output. This caused wide-spread panic and countered the initial morale boost of the war as Source 4 shows. Source 4 also says that the refugees move in a solid mass destroying meadows and woods, which suggests unification and this would be a threat to the tsar as if they directed their attacks against him, they could cause a revolution. ...read more.

So the length of the war was significant in the destruction of the Tsar because it meant the revolutionaries would have more support if they wanted to overthrow the Tsar, and the likelihood of a spontaneous revolution would be greater due to widespread unrest, but the war would still have caused great strain on the country no matter how long it was, and the Revolutionaries would still have great support. However Russia was already in a bad state before the war and a revolution would have been inevitable, but the war provided a distraction to the poor state of living. So after the initial morale boost, the war would no longer act as a distraction and unrest would go back to how it was before the war. Also because the war was going badly this added to the effect meaning that Russia would be in a worse state that it was before the war with more unrest and the peasants' and workers more likely to revolt. ...read more.

Furthermore, while the Tsar was away the Tsarina was left in charge of Russia, who was very incompetent and kept re-appointing ministers. This left Russia very vulnerable and it would be easier for revolutionaries to incite revolution and they would have more material for propaganda. So although the length of the war did cause lots of problems for the Tsar and made it easier for revolutionaries to incite revolution it was the Tsar's decision to go to war and under better management the war could have gone the other way, and the country could be stabilised with new political polices. So the Tsar's personality and his stubbornness was a major factor in Russia's involvement for the war. So it was the Tsar's fault for going to war, which greatly depleted Russia's resources which were not ready for a war due to the Tsar's poor management. Furthermore it was the Tsar's idea to become Commander in Chief against all advice which created a Political vacuum and also put all blame on the Tsar for the defeats causing an increase in hatred for the regime leading to its downfall ?? ?? ?? ?? Alex Pritchard 1 | Page ...read more.