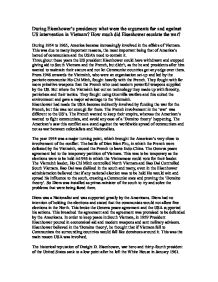 During Eisenhower's presidency what were the arguments for and against US intervention in Vietnam? How much did Eisenhower escalate the war?

During Eisenhower's presidency what were the arguments for and against US intervention in Vietnam? How much did Eisenhower escalate the war? During 1954 to 1965, America became increasingly involved in the affairs of Vietnam. This was due to many important reasons, the most important being that of America's hatred of communism and the USA's need to contain it. Throughout these years the US president Eisenhower could have withdrawn and stopped giving aid to South Vietnam and the French, but didn't, as the he and presidents after him wanted to maintain their stature and not let Communist countries get any edge over them. From 1946 onwards the Vietminh, who were an organisation set-up and led by the patriotic communist Ho Chi Minh, fought heavily with the French. They fought with far more primitive weapons than the French who used modern powerful weapons supplied by the US. But where the Vietminh lost out on technology they made up with ferocity, patriotism and their tactics. ...read more.

Diem had no intention of holding the elections and stated that the communists would not allow free elections in the North. This broke the Geneva peace agreement and the USA supported his actions. This breached the agreement and the agreement was promised to be defended by the Americans. In order to keep peace in South Vietnam, in 1959 President Eisenhower poured in economical aid and modern weapons and sent military advisors. Eisenhower believed in the 'Domino theory', he thought that if Vietnam fell to Communism the surrounding countries would fall like dominoes around it. This was the main reason USA was involved. The historical reputation of Dwight D. Eisenhower, war hero and thirty-fourth president of the United States sank to a low point after he left the White House in January 1961. Although his personal popularity with the American public had not weakened during his eight years in office, the academic and journalistic communities that had criticized his occupancy, his policies, and his personal leadership continued to believe that he had lead ineffectually over an era of relative inactivity. ...read more.

Kennedy's New Frontier. They saw Eisenhower's conservative agenda as a program to benefit the privileged and the wealthy, a Republican reaction to the progress made under Democratic reformers. Liberal scribes and specialists condemned his refusal to take on 'the dark beast of the 1950s', Senator Joseph McCarthy. They ridiculed Eisenhower's efforts to achieve fiscal responsibility and decentralized government, claiming that these efforts were little more than a smokescreen covering the president's insensitivity to the needs of the less fortunate elements of American society. Eisenhower's foreign policy (which had, after all, resulted in seven-and-a-half years of peace) came in for somewhat less criticism. Nevertheless, many criticized Vice-president Nixon's emphasis on nuclear weapons and the doctrine of massive retaliation. Most of the criticisms, however, were directed at Eisenhower's supposed failure to pursue the cold war vigorously and successfully. Eisenhower's misguided efforts to balance the federal budget, it was said, had resulted in an inadequate military posture and an unwillingness to confront America's communist enemies in areas involving either conventional or guerilla warfare. The peace of the 1950s, it was thought, was simply a matter of luck. ...read more.