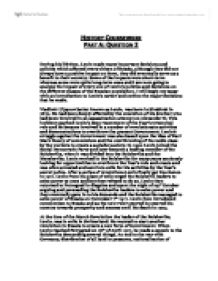 During his lifetime, Lenin made many important decisions and policies which affected every citizen of Russia, although they did not always have a positive impact on them, they did eventually serve as a benefit to their country.

HISTORY COURSEWORK PART A: QUESTION 2 During his lifetime, Lenin made many important decisions and policies which affected every citizen of Russia, although they did not always have a positive impact on them, they did eventually serve as a benefit to their country. Some of the impacts were short-term whereas some were quite long-term ones and I am now going to analyse the impact of every one of Lenin's policies and decisions on the different classes of the Russian population. I will begin my essay with an introduction to Lenin's career and outline the major decisions that he made. Vladimir Ulyanov better known as Lenin, was born in Simbirsk in 1870. He had been deeply affected by the execution of his brother who had been involved in an assassination attempt on Alexander II. This incident sparked Lenin's deep resentment of the Tsar's tyrannical rule and he became involved in a number of revolutionary activities and demonstrations to overthrow the present Government. Lenin's struggle against the Government was also based upon the idea of Karl Marx theory of communism and the overthrowing of the noble class by the workers to create a socialist society. In 1900 Lenin joined the Social Democratic Party and later became a leading member of the Bolsheviks, when it was divided into the Bolsheviks and the Mensheviks. Lenin worked in the Bolsheviks for many years anxiously looking for opportunities to overthrow the Tsar's rule and create and was often arrested and sent into exile for his activities by the Tsar's secret police. After a series of revolutions Lenin finally got his chance in 1917. Lenin from his place of exile urged the Bolshevik leaders to seize power at once and but they refused to do so. Lenin then returned to Petrograd in disguise and spent the night of 23rd October arguing and persuading the Bolsheviks leaders to seize power and they eventually gave in to his demands and the Bolsheviks managed to seize power of Russia on November 7th 1917. ...read more.

Some of the middle class that owned factories or ran an industry were able to continue their businesses and create profits and provide more goods for the market. Not everyone however, was happy with the April Theses, especially not the nobles and the Royal family. Their land had been stripped off them and distributed amongst the peasants. The nobles had kept so much of the land after 1861 and had larger estates. The peasants had to work on their estates to earn extra money. Although the nobles made up just over one percent of the population they owned almost a quarter of all the land. The nobility also lost the privileges which they had before the Bolshevik Government took over and it was the respect and proper treatment which they received due to their class. The Sovnakom had all titles and class distinctions abolished - no dukes or lords the title comrade for everybody. The nobility did not take to his too kindly, they were accustomed to the influence that they had on everyone due to their class and now they were treated equally The end to the war in 1918 did not have much effect on the nobility as it had no direct influence on them. But in one aspect it did have some impact on them, because after the war the peasants were coming to the countryside to collect their share of land which had been promised by Lenin in the April Thesis and the land that they were receiving was to be land that was owned by the nobility. The nobility as a result lost one of their most valuable assets to the peasants and received nothing in compensation. During the war communism period the rich and the nobility also suffered from the inflation of goods. "The former rich were found selling their last items. The formerly richest and most spoiled are now satisfied if they get some black bread and potatoes each day. ...read more.

His death also sparked the debate as to who should replace Lenin and the two likely candidates were Stalin and Trotsky. Stalin eventually succeeded in replacing Lenin's position and became the new ruler. Lenin's establishment a single party allowed the ruler to do whatever they wished for Russia without being questioned for their actions. Lenin had also begun the use of terror and violence in his lifetime, to eliminate opposition and criticism to his rule. This included the Cheka and the Red Terror. Although it wasn't used extensively by Lenin, it did however lay the foundations for Stalin to use as a method to control his opposition and to strike fear into his people's hearts. However, Lenin did set the basis of Russia's modernization but he also laid the foundation for Stalin's dictatorship rule. Lenin being able to use dictatorship rule effectively to accomplish his goals made it appeal to Stalin as well and he crossed the limits of dictatorship rule. Lenin's creation of the world's first communist state ruined Russia's international relations with other countries. Trade and ties were cut off as a disapproval of Communism and Russia became an isolated and an outcast state. Despite the negative aspects to Lenin's rule, he is still seen today as an and a great ruler, not only in Russia but all over the world, whether they liked communism or not. Lenin freed the Russian public from the Tsar's oppressive rule and worked fervently during his lifetime for the sake of his people and the benefit for his country. Lenin improved the conditions of the peasants and gave them land to farm on, he improved the working conditions of worker and gave them extra job benefits such as insurance. It wasn't a smooth journey for Lenin and he had to face many hurdles and difficulties on the way to accomplish his goals ( as well as the Russian people ) but he managed to combine superior leadership with hard work to change Russia forever. ...read more.