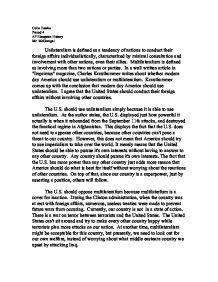 Colin Hewko Period 4 AP European History Mr. McGonigal Unilateralism is defined as a tendency of nations to conduct their foreign affairs individualistically, characterized by minimal consultation and involvement with other nations, even their allies. Multilateralism is defined as involving more than two nations or parties. In a well written article in "Imprimus" magazine, Charles Krauthammer writes about whether modern day America should use unilateralism or multilateralism. Krauthammer comes up with the conclusion that modern day America should use unilateralism. I agree that the United States should conduct their foreign affairs without involving other countries. The U.S. should use unilateralism simply because it is able to use unilateralism. As the author states, the U.S. displayed just how powerful it actually is when it rebounded from the September 11th attacks, and destroyed the fanatical regime in Afghanistan. ...read more.

The fact that the U.S. has more power than any other country just adds more reason that America should do what is best for itself without worrying about the reactions of other countries. On top of that, since our country is a superpower, just by asserting a position, others will follow. The U.S. should oppose multilateralism because multilaterlism is a cover for inaction. During the Clinton administration, when the country was at rest with foreign affairs, numerous, useless treaties were made to prevent future wars from occuring. Currently, our country is not in a state of action. There is a war on terror between terrorists and the United States. The United States can't sit around and try to make every other country happy while terrorists plan more attacks on our nation. ...read more.

Our country does not need to dictate everything, just issues that are highly important to our country, such as missile defense. Our country should be guided by our own independent judgement. The feelings of other countries should be placed fairly low on the United States' priority list when it comes to important issues. It's hard to disagree with someone on an issue when they take a stance that is fairly in the middle of the road. By mixing both sides of the argument, a person cannot be wrong. This is exactly what Krauthammer does in this article. While he favors unilateralism, he still argues for points of multilateralism. Overall, Krauthammer thinks our country should use unilaterism at the current time. I agree that, at the moment, and with important issues, the United States should conduct their foreign affairs without involving other countries. ...read more.