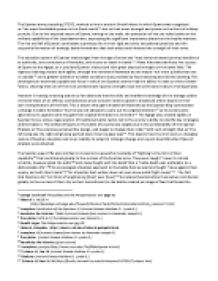 Evalute the importance, strengths and weaknesses of the Spartan Army

﻿The Spartan army preceding 371 BC, marked a time in ancient Greek history in which Sparta was recognized as ?the most formidable power in the Greek world?[1] due to their overt strength and power in the front of military pursuits. Due to the exposed nature of Sparta, having no city walls, the protection of the city relied solely on the military capabilities of the Lacedaemonians, expressing the significant importance placed on the hoplite warriors. The rise and fall of Sparta?s combatant supremacy lies in their rigid and strict educational practices and the sequential formation of strategic battle formations that both aided and hindered the strength of their army. The education system of Spartan males began from the age of seven and ?was directed toward prompt obedience to authority, stout endurance of hardship, and victory or death in battle?[2]. Many historians attribute the success of Sparta to the Agoge, as it provided Sparta?s male youth with great physical strength on the battle field. The rigorous training process built agility, through the removal of footwear as one would ?run more quickly than one in sandals?[3] and a greater tolerance to battle conditions was provided by food rationing and limited clothing. ...read more.

Entering this battle with the traditional Spartan mentality to ?always stand firm?[18] was detrimental and a clear signifier of Sparta?s fall ?for the city could not withstand a single blow?[19]. Due to the fact that Sparta entered the battle of Leuctra with knowledge of their inability to recover from defeat the Spartan mentality of fighting to the death[20] weakened the army and contributed not only to Sparta?s loss of the battle, but to the general downfall of Spartan supremacy. The Spartan army acted as the only protection for Sparta as they became ?a wall of men, instead of bricks?[21], acting as the replacement of fortified walls to surround the city. The army was built upon a foundation of rigorous education schemes that instilled in its students infallible courage and knowledge as well as a mindset of dedication and commitment in the battle field. Hoplites were undoubtedly strong and titled ?the best fighters in the world?[22] and although their flaws were few, when discovered and attacked they were detrimental. The traditional nature of their strategic battle plans led to predictability and an inability to adapt to tactical changes and their conviction to war led to heavy causalities that left Sparta unable to recover and defeated. ...read more.