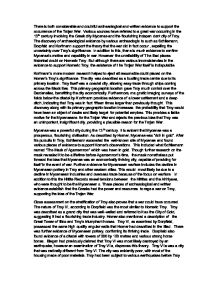 Evidence for the Trojan War.

There is both considerable and doubtful archaeological and written evidence to support the occurrence of the Trojan War. Various sources have referred to a great war occurring in the 13th century involving the Greek city Mycenae and the flourishing independent city of Troy. The discovery of archaeological evidence by various archaeologists such as Schliemann, Dorpfeld and Korfmann support the theory that the war did in fact occur, expelling the uncertainty over Troy's significance. In addition to this, there is much evidence to confirm Mycenae's motive and capability in war. However the unreliability of The Iliad places historical doubt on Homeric Troy. But although there are various inconsistencies in the evidence to support Homeric Troy, the existence of the Trojan War itself is indisputable. Korfmann's more modern research helped to eject all reasonable doubt placed on the Homer's Troy's significance. The city was described as a bustling trade centre due to its primary location. ...read more.

In addition to this the Hittite Records reveal tensions between the Hittites and the Ahhiyawa, who were thought to be the Mycenaeans. These pieces of archaeological and written evidence establish that the Greeks had the power and resources to rage a war on Troy, supporting the idea of the Trojan War. Close assessment on the stratification of Troy also proves that a war could have occurred. The nature of Troy VI, according to Dorpfield was the most similar to Homeric Troy. Troy was described as a grand city that was well-walled and referred to it as the City of Gold, suggesting it had a flourishing trade industry. Homer also mentioned a description of the Great Tower of Iilios and Troy's triumphant horses. Troy VI, as examined by Dorpfield, possessed the same high quality angular walls that Homer had described in the Illiad. There was further evidence of Mycenaean pottery, confirming its thriving trade. ...read more.

The story was most likely a collection of accounts that were passed on from generation to generation. Though the physical evidence actively supports the existence of a war, the accumulation of the mythological elements and the unreliability, makes it impossible for historians to determine that the war was the exactsame war described by Homer. The various pieces of evidence, both written and archaeological provide substantial reasoning for the existence of a war occurring in Troy during the 13th century. However, modern historians can never be completely sure that the story that Homer provided in the Iliad was precise due to the holes that appear in the story and the evidence. The description of both the war and the reason behind the war became far too romantic to believe as time passed; a dispute over a woman would have been believable in the past but because historians began to look upon the Iliad realistically, they have been able to identify the inconsistencies in the story. These inconsistencies in the evidence help to disprove the events describe by Homer but nonetheless, the existence of the Trojan War itself is indisputable. ...read more.