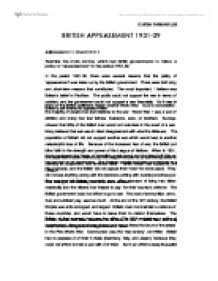 Examine the main factors, which led British governments to follow a policy of 'appeasement' in the period 1931-38

BRITISH APPEASEMENT 1931-39 ASSIGNMENT 1: OBJECTIVE 1 Examine the main factors, which led British governments to follow a policy of 'appeasement' in the period 1931-38 In the period 1931-38, there were several reasons that the policy of 'appeasement' was taken up by the British government. There were both long and short-term reasons that contributed. The most important, I believe was Britain's belief in Pacifism. The public could not support the war in terms of soldiers, and the government could not support a war financially. So it was in Britain's self interest to appease Hitler. Many of the British politicians feared another World War. Due to conscription, the majority of people had lost relatives to the war. World War 1 was a war of attrition and many had lost fathers, husbands, sons, or brothers. Surveys showed that 60% of the British men would not volunteer in the event of a war. Many believed that war was in direct disagreement with what the bible sad. The population of Britain did not support another war which would lead to another catastrophic loss of life. Because of the increased fear of war, the British put blind faith in the strength and power of the League of Nations. ...read more.

Another problem that they faced was that their once-modern air force had been made redundant as technology had advanced. Chamberlain's Royal Air Force Commander needed another 12 months to finish updating the air force. Chamberlain was playing for time. In September 1938, Britain had only 6 Hurricane Squadrons. Their air power lay in outdated biplanes. Hurricanes were rolling of production queues as they spoke, but were no where near defensive strength. By September 1939, as the RAF Commander predicted, Britain had 36 Hurricane squadrons. Another key problem was their financial status. Germany had come out of the Great Depression rapidly, unlike Britain who had struggled. Britain was not in a strong position, and could not support a war. By appeasing Hitler, they maintained trade with a strong country, boosting their economy. Chamberlain, leading a democratic state, had to do what was in the interest of the people and due to the lack of public support for another war; Chamberlain was forced to appease Hitler. Surveys had shown that 60% of the country's men would not enlist themselves into the army voluntarily. The citizens of London were afraid of the German Luftwaffe. The theory that the 'bomber would always get through' scared the population to the extent that the Londoners believed that they would be killed in a raid against them. ...read more.

The declaration of war had startled him, as he had presumed that England was bluffing. Strategists had predicted that Hitler's current rate of takeover in Europe, it would eventually lead to the invasion of Britain. Chamberlain had promised Hitler the Sudetenland, and even though he had taken the entire country, Britain did nothing. But they had realised that Britain was ultimately on Hitler's 'hit-list'. Therefore Chamberlain wanted to keep the war on the European mainland. So he made the declaration that if Hitler invaded Poland, he would have no choice but to go to war. By September 1939, Britain's air-defences had been enhanced, and they were ready to defend themselves. The RADAR, fighter squadrons, air raid facilities, and the BEF (British Expedionary Force) were now all ready, and limited conscription had been introduced, through the recommendation of the Committee of Imperial Defence. But it was not as if the British people had suddenly realised that the bombing would be lessened, but it the casualties and loss of homes were now more acceptable. Chamberlain knew that eventually Hitler would strike the British Isles, and he preferred to keep on the mainland of Europe. When Poland was finally invaded by the Germans, he decided that this was the best possible time to declare war. Word Count: 450 Total Word Count: 1529 ?? ?? ?? ?? DIVESH PARMAR U5S ...read more.