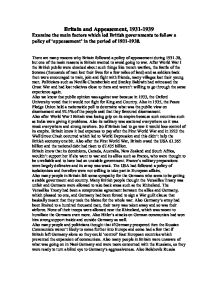 Examine the main factors which led British governments to follow a policy of 'appeasement' in the period of 1931-1938.

Britain and Appeasement, 1931-1939 Examine the main factors which led British governments to follow a policy of 'appeasement' in the period of 1931-1938. There are many reasons why Britain followed a policy of appeasement during 1931-38, but one of the main reasons is Britain wanted to avoid going to war. After World War I the British public were shocked about such things like trench warfare, the Battle of the Somme (thousands of men lost their lives for a few miles of land) and as soldiers back then were encouraged to train, join and fight with friends, many villages lost their young men. Politicians such as Neville Chamberlain and Stanley Baldwin had witnessed the Great War and had lost relatives close to them and weren't willing to go through the same experience again. Also we know that public opinion was against war because in 1933, the Oxford University voted that it would not fight for King and Country. Also in 1935, the Peace Pledge Union held a nationwide poll to determine what was the public view on disarmament and 92.5% of the people said that they favoured disarmament. ...read more.

Also Hitler's attacks on German communists had won him strong support inside and outside Germany as well. Also many people and politicians thought that if Germany prospered then the Russian Communists weren't likely to come further into Europe and some had a few that if Britain left Germany alone so they could 'control' East European countries which prevented the expansion of communism. Also many people in Britain were unaware of what was going on in Nazi Germany and were more concerned with the Russians, so they were ready to turn a blind eye to Germany's aggressiveness. Also Bolshevik Russia propaganda was aimed at inciting revolts in capitalist countries and hopefully turning them communist. The Russians were the ultimate threat to the British although Russia had been had ally of Britain's in the First World War. Even if Britain had decided to turn to the Russia, the Russians couldn't have helped that much because she was isolationist and Stalin was concentrating on industrial development. This 'industrial development' involved killing lots of innocent civilians and many soldiers from the army, which caused the Russians army to be weak. ...read more.

Chamberlain believed in active appeasement and as he was Chancellor of the Exchequer (1931-1937) and so he knew what a war could do financially to Britain. He was also the Primeminister, from 1937-1940, and he believed in the reasonableness of all men and was on a mission to secure European Peace. Appeasement was also supported by Lord Halifax (Foreign Secretary), Sir Samuel Hoare (Home Secretary), Sir John Simon (Chancellor of the Exchequer) and also the Conservative Party. The Cliveden Set supported appeasement, and one of its members Lord Astor, owned the times, which was a very popular paper and therefore influenced the way the public viewed appeasement. All of these government officials supported the policy of appeasement, backed by the majority of the public and therefore Chamberlain probably thought he would have to try his utmost to avoid war with Germany. All of these different factors such as buying time to build up the military, to not having a repeat of the First World War left no doubt in the minds of British people, that it would be logical to support appeasement. ...read more.