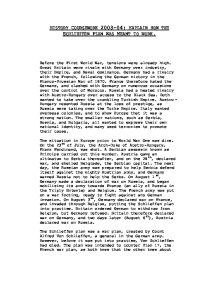 Explain How the Schlieffen Plan Was Meant To Work.

HISTORY COURSEWORK 2003-04: EXPLAIN HOW THE SCHLIEFFEN PLAN WAS MEANT TO WORK. Before the First World War, tensions were already high. Great Britain were rivals with Germany over industry, their Empire, and Naval dominance. Germany had a rivalry with the French, following the German victory in the Franco-Prussian War of 1870. France therefore hated the Germans, and clashed with Germany on numerous occasions over the control of Morocco. Russia had a heated rivalry with Austro-Hungary over access to the Black Sea. Both wanted to take over the crumbling Turkish Empire. Austro-Hungary resented Russia at the loss of prestige, as Russia were taking over the Turks Empire. Italy wanted overseas colonies, and to show Europe that it was a strong nation. The smaller nations, such as Serbia, Bosnia, and Bulgaria, all wanted to express their own national identity, and many used terrorism to promote their cause. The situation in Europe prior to World War One was dire. ...read more.

However, before it was put into practise, Von Schlieffen had died. The plan was intended to counter Plan 17, the French war plan, as both knew that the other knew about the plans, the Schlieffen plan had to counter the defences on the French border. The plan was made in 1905, thirteen years before the outbreak of the First World War. It was created to prevent a war on two fronts, something Germany didn't want. The triple Entente (friendship in French), sandwiched Germany, with Russia being the Eastern Front, and France being the Western Front. Plan 17 (the French plan), was created to counteract any German war plan, and therefore defending in the region of Alsace-Lorraine, therefore heavily fortifying Toul, Epinal, Verdun, and Nancy. Had the French generals known the German's planned to invade through Belgium, thus making their border defences irrelevant, they would have changed their plan accordingly. As it was, they didn't, and the Schlieffen plan looked a superb creation. The British had also devised a plan. ...read more.

Therefore, the German leaders thought that if the moved fast enough, they could race past the French troops, and capture Paris within six weeks. After that had happened, the majority of the German army would be transported to their Eastern border (with Russia) by the railway system they had spent months developing, and hold any Russian opposition. The German leaders didn't fear the small British contingent, known as the British Expeditionary Force (B.E.F), and didn't even expect the British to aid the Belgians. Even if the British army did come, the Germans planned to capture the ports on the Channel, at Ostend, Dunkirk, Calais, and Boulogne. They would then sweep south, preventing the British army travelling across France in large numbers. As it was, the Germans didn't expect the Russians to be ready in any less than six weeks. They therefore intended to ignore them to start with. After France was conquered, and the British were unable to land, the enormous German army could transfer across via the railway system, to the Eastern Front, and take on the Russians. ...read more.