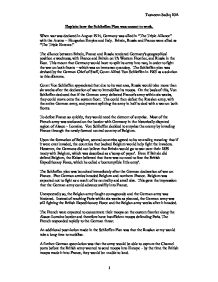 Explain how the Schlieffen Plan was meant to work. When war was declared in August 1914, Germany was allied in "The Triple Alliance" with the Austro - Hungarian Empire and Italy. Britain, Russia and France were allied as "The Triple Entente." The alliance between Britain, France and Russia rendered Germany's geographical position a weakness, with France and Britain on it's Western Frontier, and Russia in the East. This meant that Germany would have to split its army into two, in order to fight the war on both fronts - which was an immense quandary. The Schlieffen plan was devised by the German Chief of Staff, Count Alfred Von Schlieffen in 1905 as a solution to this dilemma. Count Von Schlieffen appreciated that due to its vast area, Russia would take more than six weeks after the declaration of war to immobilise its troops. On the basis of this, Von Schlieffen deduced that if the German army defeated France's army within six weeks, they could move onto the eastern front. The could then defeat the Russian army, with the entire German army, and prevent splitting the army in half to deal with a war on both fronts. To defeat France so quickly, they would need the element of surprise. Most of the French army was stationed on the border with Germany in the historically disputed region of Alsace - Lorraine. ...read more.

They had to fight against the Allies in the west, and the Russians in the east, as the Kaiser had feared in 1914. However, the Germans realised that they still had not captured the Channel ports. Which provided the flow of British troops and French supplies. Germany's big chance was to close the ports and block Ally supplies. Due to this, the 'race to the sea' occurred. Both Germany and Britain had formidable navies, which were fighting for control over the ports. Eventually, an uncomfortable stillness settled along the Western Front. The Germans stood their ground firmly, to prevent losing the ground that they had already captured. The French and British were unable to drive Germany back. The soldiers were then forced to dig into the ground for safety. With the passing of time, a series of trenches were built. The trenches saw the bloodshed and senseless fighting of the stalemate, and thousands of soldiers died, where most were driven to the brink of insanity. A stalemate had been reached. Breaking the Stalemate In March 1918, the German army broke the Stalemate. There are several factors as to why the stalemate was finally broken. Most historians think that that they are all of equal importance and it was a combination of four factors that broke the stalemate. These factors were the American entry into the War, the introduction of new technologies, the blockading of the German ports, and the German offensive used in March 1918. ...read more.

There were other factors involved leading to the breaking of the stalemate, but these were, by far the most effective. The departure of Russia from the War helped Germany almost win the war on the sea. The submarine warfare led to the entry of the American troops. Their fresh soldiers and money helped the Allies. This was a great advantage against the exhausted German troops. The German Allies soon began to surrender leaving Germany alone on the battlefield. The entry of new money in the War helped the Allies blockade the ports, and keep the blockade secure, resulting in a political and economical crisis in Germany. The lack of weapons and supplies then affected the soldiers on the battlefield, and an armistice was called on the 11th of November. In conclusion, I agree with the statement saying that these for factors were of equal importance as to why the stalemate on the Western Front was finally broken. Parts of a factor lead to a development of parts of another factor, which eventually lead to allied victory. The Russian Revolution and submarine warfare began this chain, and before the armistice, the lack of supplies and failure of the German offensive ended the chain. However, these four factors alone were not the overall reason why the stalemate was broken as they were not enough to completely break the stalemate on the Western Front alone, counter attack plans from the Allies like the Foch strategy also helped break stalemate. Tasneem Sadiq 10A 1 ...read more.