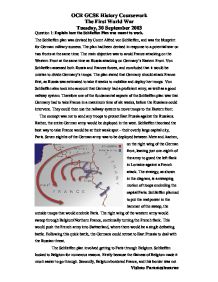 Question 1: Explain how the Schlieffen Plan was meant to work. The Schlieffen plan was devised by Count Alfred von Schlieffen, and was the blueprint for German military success. The plan had been devised in response to a potential war on two fronts at the same time. The main objective was to avoid France attacking on the Western Front at the same time as Russia attacking on Germany's Eastern Front. Von Schlieffen assessed both Russia and Frances forces, and concluded that it would be unwise to divide Germany's troops. The plan stated that Germany should attack France first, as Russia was estimated to take 6 weeks to mobilise and deploy her troops. Von Schlieffen also took into account that Germany had a proficient army, as well as a good railway system. Therefore one of the fundamental aspects of the Schlieffen plan was that Germany had to take France in a maximum time of six weeks, before the Russians could intervene. They could then use the railway system to move troops to the Eastern front. The concept was not to send any troops to protect East Prussia against the Russians. Rather, the entire German army would be deployed in the west. Schlieffen theorised the best way to take France would be at their weak spot - their overly large capital city, Paris. Seven eighths of the German army was to be deployed between Metz and Aachen, on the right wing of the German front, leaving just one-eighth of the army to guard the left flank in Lorraine against a French attack. The strategy, as shown in the diagram, is a sweeping motion of troops encircling the capital Paris. Schlieffen planned to put the real power in the hammer of the sweep, the outside troops that would encircle Paris. The right wing of the western army would sweep through Belgium/Northern France, continually turning the French flank. ...read more.

The strategies and weapons employed were based around a defensive stance. This meant that no real progression could have been made if both sides were fighting defensively. The main factor of new technology used in World War 1 was the tank. Initially, tanks were highly unreliable. This meant that they would often break down, they were slow, and the strategies with which they were employed did not achieve much success. Tanks were also often used in isolation, when the tanks great strength was when they were used in collaboration with many other tanks. However, the tank did allow for the infantry to move across no man's land, protected from machine gun fire. This unreliability could be especially seen when they were first used at the Battle of the Somme in 1916. But after the battle of the Somme and their limited success, the Allies had learnt important tactical lessons, and began to fight a technical war. The true potential of the tank was seen by the year 1917, and the battle of Cambrai. Previously, before attacking the allies would attack they would issue an artillery bombardment. At Cambrai, there was no bombardment, as this would churn the battle field ground, and the ideal terrain for tanks would be on flat ground. Now that there was no bombardment, no indication was given to the opposition that the infantry were coming. The tanks were tightly packed together, and closely behind followed the infantry. The allies successfully crushed the Hindenburg line, and managed to make an advance of four miles. Even though the British were unable to sustain this initial success, it showed how, combined with well thought out tactics, the tank could be used to break the stalemate. A year following this, the tanks had been massively improved. They were now much more manoeuvrable, and could cross more terrain easier. But, with advantages came limitations. Tanks were extremely limited, because they would often sink into mud holes, and once they were in there the infantry would be unable to remove the tanks from the mud. ...read more.

At the time of the stalemate, U.S.A. had the largest economy in the world, and could therefore afford to pay for weaponry, as well as give large loans. When the American forces entered the war in 1918, they were enthusiastic, but they were also na�ve and inexperienced. The impact of the American troops took a while to be felt because their army in 1917 was extremely limited. They had small numbers of men, and many others had to be recruited, trained and transported before any fighting on the Western front could begin. But the numbers of troops sent over from the U.S.A. exponentially increased, and eventually the future impact of this super power could be felt. The main effects of the entry were twofold. Firstly, it reinforced, if not strengthened, the Allies resources in all aspects - manpower, money, weapons and so on. Secondly, the resources placed a great strain on the Germans. Germany was unable to compete with the sheer power of the American troops, and could therefore not sustain the stalemate on the western front. To conclude, the American entry had the greatest weighting of the four reasons. In conclusion every factor must be used in explaining how the stalemate on the western front was broken. If one factor was lacking, then the breaking of the stalemate would not have been achieved. The four factors also link in many ways. For example, the submarine was a new invention, and it was used by the British to blockade the German ports, which was a significant factor towards breaking the stalemate. The German U-Boats were used in unrestricted submarine warfare, which led to the American entry into the war. The American entry into the war had immediate and long term impacts in terms of breaking the stalemate. Without the American entry into the war, the stalemate would not have been broken as soon as it did, because the three other reasons alone were not enough to cause the other side to retreat and break the stalemate. OCR GCSE History Coursework The First World War Tuesday, 30 September 2003 Vishnu Parameshwaran ...read more.