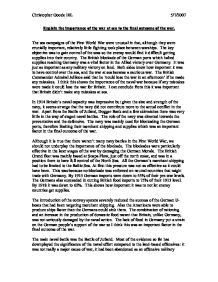 Explain the importance of the war at sea to the final outcome of the war.

Explain the importance of the war at sea to the final outcome of the war. The sea campaigns of the First World War were unusual in that, although they were crucially important, relatively little fighting took place between warships. The key objective was to gain control of the seas so the enemy would find it difficult getting supplies into their country. The British blockade of the German ports which halted supplies reaching Germany was a vital factor in the Allied victory over Germany. It was just as important as any military victory on land. Both sides knew how important it was to have control over the sea, and the war at sea became a cautious war. The British Commander Admiral Jellicoe said that he 'could lose the war in an afternoon' if he made any mistakes. I think this shows the importance of the naval war because if any mistakes were made it could lose the war for Britain. ...read more.

The British Grand fleet was mainly based at Scapa Flow, just off the north coast, and was in a position there to have full control of the North Sea. All the German's merchant shipping had to be limited to the Baltic Sea. At first this pressure was not as effective as it could have been. This was because no blockade was enforced on neutral countries that might trade with Germany. By 1915 German imports were down to 55% of their pre-war levels. The Germans also succeeded in cutting British food imports to 75% of their 1913 level. By 1918 it was down to 65%. This shows how important it was to not let enemy countries get supplies. The introduction of the convoy system severely reduced the success of the German U-boats that had been targeting merchant shipping. Also the Americans were able to produce ships faster than the Germans could sink them. ...read more.

This last point was especially significant since it blocked the supply route to the Russians, who desperately needed help. This block was probably a major factor in Russia withdrawing from the war. There were also negative aspects from the German perspective. If the Battle of Jutland had removed tsarist Russia as a threat it must therefore have assisted the rise of the Bolsheviks to power. Also the increased use of submarines after the success of Jutland prompted America to join the war. The entrance of the U.S.A effectively turned the war in the allies favor. So looking at this I would say the Battle of Jutland was quite significant and played quite an important role of the outcome of the war. In the short-term story of the war between Germany and Britain the battle was ultimately indecisive. Overall the naval efforts were eclipsed by events further south. Victory and defeat would be decided on dry land in the muddy trenches of Belgium and France, not the icy waves of the North and Baltic seas. Christopher Goode 10L 5/7/2007 ...read more.