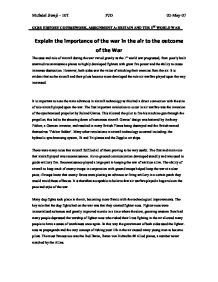 GCSE HISTORY COURSEWORK, ASSIGNMENT A: BRITAIN AND THE 1ST WORLD WAR Explain the importance of the war in the air to the outcome of the War The uses and role of aircraft during the war varied greatly as the 1st world war progressed, from poorly built unarmed reconnaissance planes to highly developed fighters with great fire power and the ability to cause immense destruction. However, both sides saw the value of attacking their enemies from the air. It is evident that as the aircraft and their pilots became more developed the role air warfare played upon the way increased. It is important to note the main advances in aircraft technology as this had a direct connection with the size of role aircraft played upon the war. The first important revolution to occur in air warfare was the invention of the synchronised propeller by Roland Garros. ...read more.

It is therefore acceptable to believe that air warfare played a huge role on the pace and style of the war. Many dog-fights took place in the air, becoming more frantic with the technological improvements. The key role that the dog-fights had on the war was that they created fighter-aces. Fighter-aces were immortalised as heroes and greatly improved morale in a time where the slow, gnawing western front had many people depressed the worship of fighter-aces who risked their lives fighting in the air allowed many people to have a sense of worthiness once again. In this way the government of both sides used the fighter-aces as propaganda and the very concept of risking your life in the air caused many young men to become pilots. The most famous ace was the Red Baron, Baron von Richtofen 80 allied planes, a number never matched by the Allies. ...read more.

The reconnaissance power of aircraft combined with communications to the troops on the ground were a great help in the success of the allies in many of the battles in late 1917-1918. Integrated warfare was a great success and had a huge impact on the war. It is evident that aircraft played some role upon the outcome of the war. Whether it is a major role or a minor role is balanced upon whether we count aircraft, which were used in integrated warfare. As integrated warfare would not have been existed without aircraft than I would definitely acknowledge the key role aircraft played in the war. The reconnaissance abilities did lead to the static ground troops war, however the reconnaissance at sea and the part played in integrated warfare was invaluable. It is therefore I conclude by saying without the valuable abilities provided by the aircraft the war would have been completely different, and therefore aircraft played a huge impact on the outcome of the war. Mufadal Jiwaji - 10T PJD 02-May-07 ...read more.