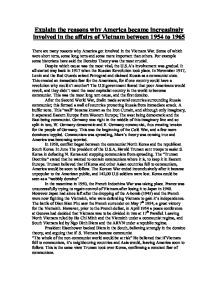 Explain the reasons why America became increasingly involved in the affairs of Vietnam between 1954 to 1965 There are many reasons why America got involved in the Vietnam War. Some of which were short term, some long term and some more important than others. For example some historians have said the Domino Theory was the most crucial. Despite which cause was the most vital, the U.S.A's involvement was gradual. It all started way back in 1917 when the Russian Revolution took place. In November 1917, Lenin and the Red Guards seized Petrograd and claimed Russia as a communist state. This created an immediate fear for the Americans, for if one country could have a revolution why couldn't another? The U.S government feared that poor Americans would revolt, and they didn't want the most capitalist country in the world to become communist. This was the most long tern cause, and the first domino. After the Second World War, Stalin made several countries surrounding Russia communist; this formed a wall of countries protecting Russia from immediate attack. A buffer zone. This "wall" became known as the Iron Curtain, and although only imaginary, it separated Eastern Europe from Western Europe; The west being democratic and the East being communist. Germany was right in the middle of this imaginary line and so split in two, W. ...read more.

This is the same view Truman took over Korea, confirming a constant fear of communism. Despite Eisenhower's want to stop the spread of communism, another war so soon after Korea would be extremely unpopular. (in fact comparing the Korean War to the Vietnam War shows many similarities) So Eisenhower couldn't send troops to help defeat N. Vietnam. Instead he sent aid to pay for weapons and equipment and he sent 12 Military advisors to the south to train the ARVN. This was the first real step in America's involvement, because America now had a physical presence in Vietnam. This is the most important long-term cause, as without the advisors the Vietcong would not have had any Americans to attack and so no U.S bombing campaigns or ground troops would have been sent to retaliate. John F Kennedy followed on from Eisenhower, believing in the same ideas. He upped the number of advisors in S. Vietnam and sent mercenaries; ex soldiers to actually fight the Vietcong. This intensified U.S involvement as by the end of 1962 there were 12,000 Americans present in Vietnam. Kennedy also set up the "Strategic Hamlet" program. It's aim was to stop the influence of the NLF on the south Vietnamese peasants. ...read more.

So on March 8th 1965, 3,500 U.S Marines were sent to S. Vietnam. This was the shortest term of all causes, it was what escalated the war and was the start of many American deaths. Many historians have come up with many theories as to the reasons behind America's involvement in the Vietnam War. For example, Schlesinger's idea is "Bitter Heritage". This idea is that America has had such a bad history of communism spreading ever nearer to them, that each president in turn has been forced to continue the previous president's goal of stopping it. Each getting more and more into a quagmire of long war, and each president not being able to pull out. Whereas Neom Chomsky's idea is that America only entered Vietnam for economic reasons, to deny Russia Vietnam's resources. The most important cause of America's involvement is the domino theory, because every president carried on the idea. From Truman to Eisenhower to Kennedy to Johnson. They all believed in it. They believed that if one country were to fall to communism (Vietnam) then another would fall and another and another until eventually ever country is communist. Just like a row of dominoes falling. Once one goes they all go. The presidents wanted to stop this. This proves that there is an underlying, constant American fear of communism. This is because a lot of rich Americans would lose a lot of their money if U.S.A became communist. ...read more.