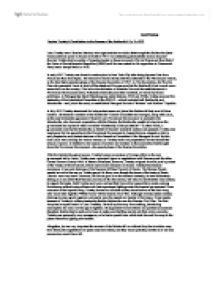 Josef Fleming Explain Trotsky's Contribution to the Success of the Bolshevik's Up To 1922 Leon Trotsky was a Russian Marxist, who organized the revolution that brought the Bolsheviks (later Communists) to power in Russia in October 1917. An outstanding administrator and an eloquent theorist, Trotsky held a number of important posts in the government of Soviet Russia and then that of the Union of Soviet Socialist Republics (USSR) until he was ousted for his opposition to Communist Party leader Joseph Stalin in 1925. In early 1917 Trotsky was forced to seek asylum in New York City after being deported first from France and then from Spain. He returned to Russia shortly after the outbreak of the February (or March, in the New Style calendar) phase of the Russian Revolution of 1917. ...read more.

a so-called "dictatorship of the proletariat"-in other words, a government ruled by the Bolsheviks on behalf of Russia's industrial workers and peasants. Trotsky was imprisoned for his opposition to the Provisional Government in August but was released on bail in early September and elected chairman of the Executive Committee of the Petrograd Soviet. By this time Lenin was in hiding for various reasons, so Trotsky took over preparations for the Bolsheviks' seizure of power. In October he led masses of soldiers and workers in the insurrection that brought down the Provisional Government-the second phase of the Russian Revolution. After the Bolsheviks gained power, Trotsky became commissar of foreign affairs in the new government led by Lenin. Trotsky was a principal figure in negotiations with Germany and the other Central Powers in early 1918. ...read more.

Although Trotsky lacked military training, he was a good organizer and easily won the respect and loyalty of his troops. It was largely because of Trotsky's military leadership that the Bolsheviks won the Russian Civil War. The Red Army had a superb leader in Leon Trotshky. He built up the army from nothing, introducing conscription for men over the age of eighteen. He appointed Tsarist officers and political commissars (fanatical Bolsheviks) to each unit of men to make sure that they carried out their orders correctly. Trotsky was personally very courageous, as he had a special train which took him and his army to the places where the fighting was hardest. Altogether, he was very important the success of the Bolshevik's as without him, the revolution may have failed, the negotiations for peace may have failed, and they would probably lost the civil war and communism would have fell. ...read more.