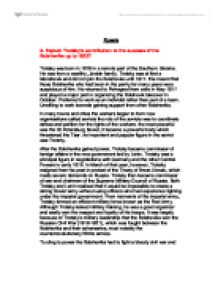 Explain Trotsky's contribution to the success of the Bolsheviks up to 1922?

Russia A. Explain Trotsky's contribution to the success of the Bolsheviks up to 1922? Trotsky was born in 1879 in a remote part of the Southern Ukraine. He was from a wealthy, Jewish family. Trotsky was at first a Menshevik and did not join the Bolshevks until 1917. this meant that those Bolsheviks who had been in the partry for many years were suspicious of him. He returned to Petrograd from exile in May 1917 and played a major part in organizing the Bolshevik takeover in October. Preferred to work as an individal rather than part of a team. Unwilling to work towords gaining support from other Bolsheviks. In many towns and cities the workers began to form new organisations called soviets the role of the soviets was to coordinate strikes and petition for the rights of the workers. the most powerful was the St Petersburg Soviet, it became a powerful body which threatened the Tsar. An important and popular figure in the soviet was Trotshy. ...read more.

To cling to power the Bolsheviks had to fight a bloody civil war and use terror against those who did not support them. By 1921 they had won the civil war eliminated their enemies and, strengthened their position. The Tsar and his family were murderd at Ekaterinburg. Trotsky explained why this happen " the execution of hte Tsar and his family was to horrify the enemy, shake up uor own ranks that there was no turning back. It was his brillance and fighting that was altanatley responsible for the Reds victory for the civil war. Trotsky created the Red Army to spead the power of the soviets and the Bolsheviks, and to defeat the White army. the army was inexperienced so he used professional army officers to organise it. He enforced constripion on men age 18 to 40 into the army and threated to shoot those who refused to obey and join the army. the ruthless meothods used by the Bolsheviks during the civil war to feed the army was called War Communism. ...read more.

that would bring together Marxists from different countries to promote world revolution. (The two would cofound the Third International-also known as the Communist International, or Comintern-in 1919). Trosky had a major role in preparating for the November Revolution of 1917. He played a major part in setting up and controlling the Military Revalutionary Committee. He also played a major part in plaining the detal of the November Revalution, so more historions say that he was more important than Lenin in the active revolution, as he was the main military leader. On the night of 6th November 1917, Trotsky led the Red Guard troops that took over strategic points of Petrograd, without much opposition. In the morning Trotsky then led them into the Winter Palace, and overthrew the Provisional Government. In conclusion Trotsky was recognised as a key strategist in the November Revolution of 1917 leading the Military Revolutionary Committee. He was appoined comissar for War, he created the Red Army and inspired the Reds to victory in the Civil War and was chief negotiator at Brest Litivsk. Lenin described him as the ablest man in the Central Committee. Ashling Cleere E20 ...read more.