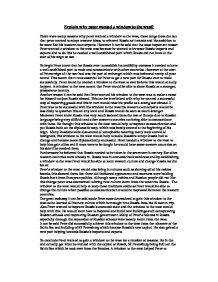 Explain why peter the great wanted a window to the west

Moreover Peter knew Russia was very much isolated from the rest of Europe due to Russian language being very difficult and other western countries not being able to communicate with them. He thought this window to the west would help to improve communication and put Russia back on the diplomatic map, which was barely around at the beginning of his reign. Many Russians were also scared of xenophobia meaning many were scared of foreigners, this window to the west would help to make Russians accept Russia had to change and become more diplomatically successful. Peter needed a window to the west to help him gain allies and if wars were to be fought he would have some western countries on his side if he needed them. Furthermore he believed that Russia needed to be taken in the seventeenth century like other western countries were already in. ...read more.

He would learn how to improve and build new buildings such as improving Russian schools and improving Russian government. Many of Peter's reforms in Russia especially through the expansion of Russian schools were mostly learnt from the west. It can be said Peter did successfully achieve this window to the west from the takeover of the Baltic Sea and building of ST Petersburg which became Russia's new capital. He also gained a new port helping towards Russia's imports and exports. To conclude Peter wanted to gain a window to the west for a number of reasons. He in the end actually got what he wanted with the capital of Russia, ST Petersburg being built on the Baltic Sea which he took over from the Swedes. A window to the west helped Peter to establish his position abroad and to show other countries Russia had become a force to be reckoned with. ...read more.