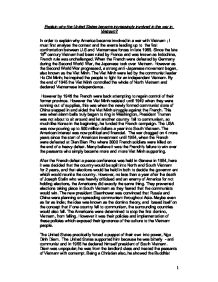 Explain why the United states became increasing involved in Vietnam

Explain why the United States became increasingly involved in the war in Vietnam? In order to explain why America became involved in a war with Vietnam; I must first analyse the context and the events leading up to the first confrontation between U.S and Vietnamese forces in late 1965. Since the late 19th century Vietnam had been ruled by France and was known as Indochina, French rule was unchallenged. When the French were defeated by Germany during the Second World War, the Japanese took over Vietnam. However as the Second World War progressed, a strong anti-Japanese movement began, also known as the Viet Minh. The Viet Minh were led by the communist leader Ho Chi Minh; he inspired the people to fight for an independent Vietnam. By the end of 1945 the Viet Minh controlled the whole of North Vietnam and declared Vietnamese independence. However by 1946 the French were back attempting to regain control of their former province. However the Viet Minh resisted until 1949 when they were running out of supplies, this was when the newly formed communist state of China stepped in and aided the Viet Minh struggle against the French. ...read more.

The Americans were determined to stop the first domino, Vietnam, from falling. However it was their policies and implementation of these policies which exposed their ignorance of the culture to the Vietnam people. The United States practically forced a puppet of their own into power, Ngo Dinh Diem. The United States supported him because he was bitterly - anti communist and in 1955 he declared himself president of South Vietnam. Diem was unpopular; he was from the landlord class and treated the peasants of Vietnam with contempt. Being a Christian also, he showed the Buddhist religion no respect; he did not please the vast majority of people in South Vietnam. The Americans were concerned with his corruption and it did frustrate them, however the United States still funded his government with around 1.6 billion dollars in the 1950's. The actions of Diem's government lead to the formation of the communist National front for the liberation of South Vietnam, more commonly known as the Vietcong in 1960. ...read more.

The very same day the bill was passed Johnson ordered the bombing of North Vietnam. In early March 1965 there were combat troops arriving in South Vietnam. By the end of 1965 America knew it was truly in a war, as the first confrontations between American troops and the Vietcong and the North began. In conclusion I feel that a key factor, was trying to make some sort of return on their investment. The United States ended up ploughing billions of dollars into Vietnam and their investment was important to them. Also the change in political attitudes also aided increase involvement in the war. Up to 1965 the United States had 4 presidents involved in Vietnam all with different beliefs and varying levels of anti-communism. But overall I feel that it was indeed this anti communism within America that ultimately led to the United Sates to get involved. The U.S feared communism it threatened their whole way of life, and that is why they payed such a high price to stop it spreading into Vietnam. ?? ?? ?? ?? 1 ...read more.