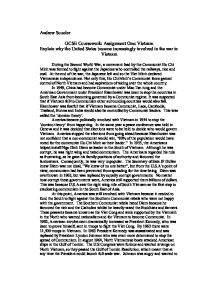 Andrew Scuoler GCSE Coursework: Assignment One: Vietnam Explain why the United States became increasingly involved in the war in Vietnam During the Second World War, a movement lead by the Communist Ho Chi Minh was formed to fight against the Japanese who controlled the railways, rice and coal. At the end of the war, the Japanese left and so the Viet Minh declared Vietnamese independence. Not only this, Ho Chi Minh's Communist force gained control of North Vietnam and had aspirations of taking over the whole country. In 1949, China had become Communist under Mao Tse-tung and the American Government under President Eisenhower was keen to stop the countries in South East Asia from becoming governed by a Communist regime. It was suspected that if Vietnam fell to Communism other surrounding countries would also fall. ...read more.

Consequently, he was very unpopular. The Secretary of Sate JF Dulles knew Diem was not ideal, "We knew of no one better", but from the U.S.A's point of view, communism had been prevented from spreading for the time being. Diem was overthrown in 1963, but was replaced by equally corrupt governments. No matter how corrupt these governments were, America still supported them billions of dollars. This was because U.S.A saw the right wing rule of South Vietnam as the first step to eradicating communism in the South East of Asia. At this point, America was still involved with Vietnam because it needed to fund the South to fight against the Southern Communist rebels who were not happy with the government. The Southern Communist rebels hated Diem because he favoured the rich and the Catholics whilst he heavily taxed the Buddhists and farmers. ...read more.

Johnson was angry and wanted to crush communism once and for all in the South East of Asia. U.S involvement climaxed when in March 1965 when U.S troops arrived at Da Nang to combat the Viet Cong. This signified the start of a long and bloody war with the North Vietnamese. The long-term factor for the U.S.A becoming increasingly involved was that it wanted to stop the spread of Communism. The short-term factors that prolonged their presence were the defeats of their allies, France and then the democratic South. After France was defeated, the U.S.A had to stay to set up a new government. Their involvement increased when the new government under Diem was defeated because they had to send in their own troops to fight the Communists in order to stop Communism spreading. Ultimately America became more and more involved because Communism was not being stopped and the U.S.A was going to stay until it had got what it wanted. ...read more.