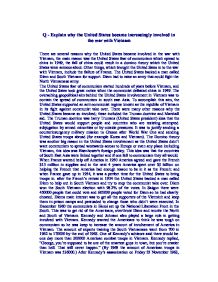 Explain why the United States became increasingly involved in the war with Vietnam.

This idea was that the countries of South East Asia were linked together and if one fell to communism they all would. When France wanted help off America in 1950 America agreed and gave the French $15 million in supplies and in the next 4 years America spent over $3 billion on helping the French that America had enough reason to be in it as the French: and when France gave up in 1954, it was a perfect time for the United States to bring troops in. after the French's retreat in 1954 the United States backed a man called Diem to help out in South Vietnam and try to stop the communist take over. Diem won the South Vietnam election with 98.2% of the votes. ...read more.

One of Kennedy's advisors said there would be one day more than 300000 American combat troops in Vietnam. Kennedy replied, "George, you're supposed to be one of the smartest guys in town, but you're crazier than hell. That will never happen." (By 1968 the amount of American troops in Vietnam was 536000.) After Kennedy's assassination on Friday 22 November 1963, Johnston was appointed President. It was now his job to sort out the mess in Vietnam. Johnston was eager to get the war over with so on the 13 February he agreed to "Operation Rolling Thunder". This was the bombing of North Vietnam on a regular basis. This meant a major appreciation of America's involvement. The amazing acceleration of troops and money put in to Vietnam was enhanced by President Johnston; this was one of the reasons America's involvement in Vietnam increased. The other reasons are why the Americans increased in their involvement with Vietnam. ...read more.