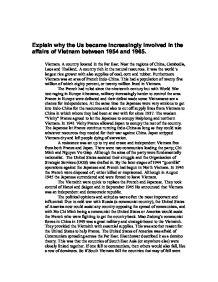 Explain why the Us became increasingly involved in the affairs of Vietnam between 1954 and 1965.

Explain why the Us became increasingly involved in the affairs of Vietnam between 1954 and 1965. Vietnam. A country located in the Far East. Near the regions of China, Cambodia, Laos and Thailand. A country rich in the natural resources. It was the world's largest rice grower with also supplies of coal, corn and rubber. Furthermore Vietnam was an area of French Indo-China. This had a population of twenty five million of which eighty percent, or twenty million lived in Vietnam. The French had ruled since the nineteenth century but with World War two raging in Europe it became, military increasingly harder to control the area. France in Europe were defeated and their defeat made some Vietnamese see a chance for independence. At the same time the Japanese were very anxious to get into Indo-China for the resources and also to cut off supply lines from Vietnam to China in which whom they had been at war with for since 1937. The weaken "Vichy" France agreed to let the Japanese to occupy Haiphong and northern Vietnam. ...read more.

Mao Zedong's communist forces in China in 1949 was a great military and strategic boost to the Vietminh. They provided the Vietminh with essential supplies. This was another reason for the United States to help France. The United States of America was afraid of Communism spreading across the Far East. Eisenhower described it as a domino theory. This was that the countries of South East Asia (or anywhere else) were closely linked together. If one fell to communism, then others would also fall, like a row of dominoes. So if South Vietnam fell the countries that may of fell were Malay or Burma. Although of little economic importance it was another country under the influence of communism. Kennedy was also keen to stamp out communism and increased the military involvement, he sent in advisors who would train the South Vietnamese Army. America's military involvement was great. The troop level peaked in 1968 at a massive 500,000. The Vietnamese army was increased to 170000 soldiers all equipped and paid for by the United States of America. The US spent nearly $270 million in military support for Diem to fight the North Vietnamese communists. ...read more.

Even jet pilots over the area reported no sign of the enemy. It was great belief by everyone, even by the President Johnson that attack had never happened, but Congress was sure it did. They believed that the solution was to give the president the power to do anything he thought necessary to defend "Freedom" in other words against communism. In congress the vote was cast and it ended in eighty-two people supporting it and only two people senators against it. He now had the power to step up military involvement but he thought that constant air attacks would work. After many defeats in battles in Vietnam the President gave his approval to a mission called "Operation Rolling Thunder." This meant the bombing of Vietnam on a very regular basis. In March 3500, United States combat troops arrived in Vietnam to protect the air bases, by the end of the year there was at least 200000 of them. Over the years the United States became increasingly involved in the affairs of Vietnam but it seems with its own interest in mind and not really for the South Vietnamese as they may claim to of done. They were mainly worried about communism spreading and not the welfare of the South Vietnamese citizens. Words = 982 ...read more.