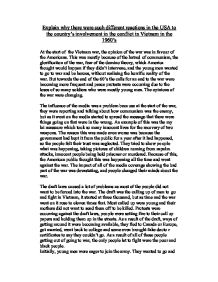 Explain why there were such different reactions in the USA to the country's involvement in the conflict in Vietnam in the 1960's At the start of the Vietnam war, the opinion of the war was in favour of the Americans. This was mostly because of the hatred of communism, the glorification of the war, fear of the domino theory, which America thought would happen if they didn't intervene, and the young men wanted to go to war and be heroes, without realising the horrific reality of the war. But towards the end of the 60's the calls for an end to the war were becoming more frequent and peace protests were occurring due to the loses of so many soldiers who were mostly young men. ...read more.

They tried to show people what was happening, taking pictures of children running from napalm attacks, innocent people being held prisoner or murdered. Because of this, the American public thought this was happening all the time and went against the war. The impact of all of the media coverage showing the bad part of the war was devastating, and people changed their minds about the war. The draft laws caused a lot of problems as most of the people did not want to be forced into the war. The draft was the calling up of men to go and fight in Vietnam, it started at three thousand, but as time and the war went on it rose to eleven times that. ...read more.

for their country, but as the media was informing the country of the way it was really being conducted reactions were different. As the death toll of the American army rose, many thought it was futile and pointless to go to Vietnam to die. Because so many young men died, I think the public thought that to many had died, and the war should end. In the late 60's, the social change was affecting the way people looked at the war. This was the time of hippies and "make love not war" ,which influenced lots of people, especially the young who were against any form of violence. As this took flight, it was strongly against the war in Vietnam. ?? ?? ?? ?? ...read more.