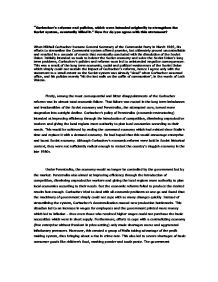 Gorbachev(TM)s reforms and policies, which were intended originally to strengthen the Soviet system, eventually killed it. How far do you agree with this statement?

Even if their opposition did not derive from selfish motives, others (such as Ligachev) opposed too much reform on grounds of principle and ideology since it would destroy the Soviet system in which they believed. For example, Gorbachev's democratization, in particular the striking out of Article 6 in the Soviet Constitution, resulted in the formation of a multiparty system where all the newly emerged opposition groups posed a huge challenge to the CPSU leadership. Gorbachev had in many senses diminished the authority of the CPSU and thus, the party had been separated from the government and stripped of its leading role in society and its function in overseeing the national economy. For seventy years, the CPSU had been the cohesive force that kept the Soviet Union together, without the authority of the party in the Soviet center, the nationalities of the constituent republics pulled harder than ever to break away from the union. Furthermore, Gorbachev's 'new thinking' de-ideologised Soviet foreign policy. Unlike previous political leaders like Andropov and Chernenko before him, he was determined achieve his goal of peaceful coexistence and d�tente with the west and was willing to give up what had previously been considered as vital foreign policy interest. He ended the arms race with the West and restored diplomatic relations with the West. Gorbachev also set out to adopt a new relationship between the USSR and Eastern Europe. By 1989, he repudiated the Brezhnev doctrine and adopted the "Sinatra Doctrine", in favour of non-intervention in the internal affairs of its Warsaw Pact Allies. Gorbachev also made it clear to the communist leaders in Eastern Europe that they would no longer have the support form the Red Army to put down protests and demonstrations and that they would have to listen to their own people. In the past these governments had relied on Soviet support. Without this help they had to deal with the protests on their own. ...read more.

In conclusion, the August coup was the short term factor which led to the fall of communism in the USSR as the failed coup merely sped up the collapse of the USSR. The coup was a result of Gorbachev's policies which worsened the economic conditions which he had inherited initially. The Soviet economy was not on the point of collapse when Gorbachev came into power. The catastrophic economic collapse of the late 1980s was a direct result of failure of Gorbachev's policies of Perestroika and Glasnost, but obviously, the collapse would not have taken place had not the serious economic weaknesses already existed. Even without Gorbachev's policies, communism would have bound to fail eventually due to the poor economy and corrupt communist system which had already existed since Stalin's time. Gorbachev's policies merely acted as a catalyst which speeded up the collapse of communism in the USSR. Furthermore, Gorbachev's unprecedented move to adopt the Sinatra Doctrine stemmed from the economic realities of the USSR - the Eastern European states were more of economic liabilities than assets and its bankrupt economy could no longer finance the Red Army to maintain tight control over the republics. Essentially, the inheritance of a troubled Soviet Union was the main reason for the collapse of communism in USSR. The prolonged economy and the rigid and corrupt communist system which Gorbachev inherited was simply unable to support his polices and also unable to cope with the internal as well as external pressures threatening the USSR. Not only did Perestroika and Glasnost fail in objectives, communism in USSR came to an end due to this long term pre-existing inherent economic weakness which rendered the USSR an incomplete superpower to begin with and thus contributing to its eventual demise. "Gorbachev's reforms and policies, which were intended originally to strengthen the Soviet system, eventually killed it." How far do you agree with this statement? ...read more.