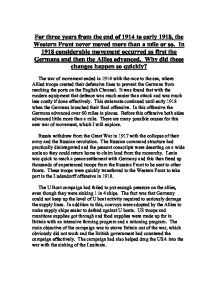 For three years from the end of 1914 to early 1918, the Western Front never moved more than a mile or so. In 1918 considerable movement occurred as first the Germans and then the Allies advanced. Why did these changes happen so quickly?

For three years from the end of 1914 to early 1918, the Western Front never moved more than a mile or so. In 1918 considerable movement occurred as first the Germans and then the Allies advanced. Why did these changes happen so quickly? The war of movement ended in 1914 with the race to the sea, where Allied troops created their defensive lines to prevent the Germans from reaching the ports on the English Channel. It was found that with the modern equipment that defence was much easier than attack and was much less costly if done effectively. This stalemate continued until early 1918 when the Germans launched their final offensive. In this offensive the Germans advanced over 60 miles in places. Before this offensive both sides advanced little more than a mile. There are many possible causes for this new war of movement, which I will explore. Russia withdrew from the Great War in 1917 with the collapse of their army and the Russian revolution. The Russian command structure had practically disintegrated and the peasant conscripts were deserting on a wide scale so they could return home to claim land from the monarchy. Lenin was quick to reach a peace settlement with Germany and this then freed up thousands of experienced troops from the Russian Front to be sent to other fronts. ...read more.

As fronts closed down, more and more Allied troops were being sent to the Western Front, although some German troops fighting on these fronts were also freed up. This also meant that Germany had no one to help her with supplies and that Germany had to fend for herself. The fall of German allies meant that her supply and trade routes were cut of as she was surrounded by enemies and her only sea front was blockaded. The USA entered the Great War in 1917 and this meant that Allied ranks were bolstered with American troops, and supplies were more readily available. However, the US only had a regular army of about 100,000 strong, no where near enough to make a considerable impact in the Great War. This meant that the US also had to conduct a massive conscription scheme to build up a sizable army. It would take at least a year to complete a new recruits training and so this gave the Germans time to put forward one last offensive. The USA's entry meant an influx of fresh troops to the Western Front, which in turn means stronger long lasting Allied offensives. Communications also played a big part in transforming the war. Radios were used more often and each allied aircraft was fitted with a radio so artillery could react quickly to changes on the battlefield. ...read more.

This would be followed by screen of smoke shells to cover the offensive. Lightly equipped storm troops would search for weak spots in the enemy lines and penetrate them avoiding all strong points. They were ordered to keep moving forward and not to slow down as this would disrupt the enemy severely especially since he was not used to defending in depth, having defensive positions only along the frontline. These strong points, now isolated, could be dealt with using standard infantry who would push forward behind the storm troops. This, however, killed the best of the German troops as the storm troops were the most experienced of the army and left only mediocre infantry who were to hold the newly gained territory. Out of all of these reasons, the most significant one would be the change in German tactics. This effectively broke the stalemate as Allied troops had to reorganise deep defences to counter this new tactic. The offensive drained most of the German Army's last strength meaning that German troops had to retreat and fall back into defensive positions. This combined with all the improvements in Allied tactics brought the war briefly back to a war of movement before the war ended. This quick change happened because of the German Army's weakness and the Allies' quick reaction to take advantage of the situation. Once the Allies broke through the Hindenburg Line, the German army was in full retreat. ...read more.