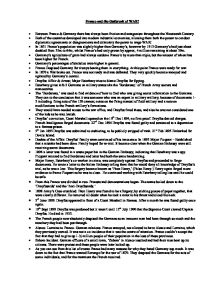 France's relationship with Germany, and the outbreak of WWI

France and the Outbreak of WAR! * Between [MLC1]gFrance & Germany there has always been friction and antagonism throughout the Nineteenth Century. * Both of the countries developed into modern industrial economies, allowing them both the power to conduct diplomatic agreements or disagreements and ultimately the power to wage WAR! * In 1851 France's population was slightly higher than Germany's, however by 1913 Germany's had just about doubled from 33m to 66m, whilst France's had only grown by approx, 4 million remaining at about 39m. * Germany's agriculture of grain had always outdone France's by more than triple, but the amount of wheat has been higher for French. * Germany's percentages of statistics were higher in general. * France Despised Germany for always beating them in everything. At this point France were ready for war. ...read more.

Dreyfus denied charges. French Intelligence forged documents. 22nd Dec 1894 Dreyfus was found guilty and sentenced to a deportation to a fortress prison. * 5th Jan 1895 Dreyfus was submitted to cashiering, to be publicly stripped of rank. 21st Feb 1895 Embarked for Devils Island. * Doubts of the Affair. Dreyfus' family were convinced of his innocence. In 1895 Major Picquart - Established that a mistake had been done. Family hoped for re-trial. It became clear when the German Embassy were still receiving secret documents. * 1896 a letter was found in a waste paper bin in the German Embassy; indicating that Esterhazy was a spy. Picquart amazed to find Bordereau and letter had both the same handwriting. * Major Henry, Esterhazy's co-worker in crime, was completely against Dreyfus and proceeded to forge documents. ...read more.

He died in 1935. * The French people now absolutely despised the Germans as an innocent man had been through so much and the treachery they had been put through. * Alsace- Lorraine to Franco- German relations. France annoyed, not allowed to have Alsace and Lorraine, which they previously owned. It was not a co-incidence that it was the centre of attention. France couldn't accept the fact that they had to give up 1-1/2 million people of their population in the loss of these provinces. * Zabern Incident. German officers of a small town, 'Zabern' in Alsace insulted and had their men beat up its citizens. There were protest and these people were later locked up. * As you can see from this list of events France had many reasons for why they hated Germany sop much. It was down to the fact that France wanted Revenge for the war of 1870. They despised the Germans for the acts of some individuals, and for the treatment the French received. [MLC1] ...read more.