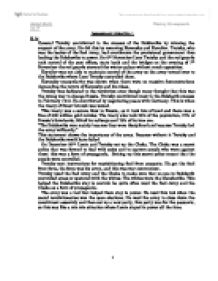 General Trotsky contributed to the success of the Bolsheviks by winning the support of the army. He did this by removing Kerensky and Kornilov.

10. F Assessment objective 1 Q A: General Trotsky contributed to the success of the Bolsheviks by winning the support of the army. He did this by removing Kerensky and Kornilov. Trotsky, who was the leader of the Red Army, had overthrown the provisional government thus leading the Bolsheviks to power. On 6th November Leon Trotsky and the red guards took control of the post offices, state bank and the bridges on the evening of 7th November the red guards stormed the winter palace without much opposition. Kornilov was not able to maintain control of the army so the army turned over to the Bolsheviks where Leon Trotsky controlled them. Kerensky unpopularity was shown when there were no massive demonstrations demanding the return of Kerensky and his ideas. Trotsky was dedicated to the revolution even though many thought that this was the wrong way to change Russia. Trotsky contributed most to the Bolshevik success in February 1918. He contributed by negotiating peace with Germany. This is when the treaty of Brest-Litovsk was issued. This treaty was a severe blow to Russia, as it took lots of land and there was a fine of 300 million gold roubles. The treaty also took 25% of the population, 27% of Russia's farmlands, 26%of its railways and 75% of its iron ore. ...read more.

Another thing that acted against Trotsky was that he was too arrogant and made little effort to build up support from the ranks of the party, he offended senior party members but even more importantly, he did not take opposition seriously, and he was too arrogant and thought he would win any way. People mostly did not support Trotsky because of one thing he supported war communism he wanted it to spread through the world this meant that he would have to get people to fight in wars, and perhaps lose land and loved ones. Lenin's testament was only ignored because Lenin wrote a book that criticised all of the Bolshevik members in the end. The testament as I have said was in Trotsky's favour, had Lenin's testament been taken account of Stalin would have surely no have com to power another reason why Trotsky was unable to turn up by Stalin's deathbed was that he had gone on holiday and was extremely ill this was his misfortune. Another reason Stalin appeared, as Stalin's successor was that he played off his opponents against each other. He did this by siding with a pair of people and then removing the person they were against and then he turned one of the people against the other, when the second person was gone he would remove the third by siding with someone else. ...read more.

The NKVD also controlled the cult as they monitored the art and music of Russia. Most of the plays and the poems praised Stalin directly or indirectly. The NKVD also banned any sort of religious worship, as Stalin did not want the people to have loyalty to anyone else but him. Even education was controlled, children were taught not the way we are but under a Stalinist regime and were later sent to join the regime. "The teacher showed us her school textbooks where the portraits of party leaders had thick pieces of paper pasted over them as one by one they fell into disgrace-this the children had to do on instructions from their teacher... with every new arrest, people went through their books and burned the works of disgraced leaders in their stoves" Stalin's economic plans helped because they modernised Russia as Stalin said: "Throughout history Russia has been beaten again and again because she was backward..." They helped produce a lot more things than they would have without the five-year plans. Not only this but by 1937 the USSR was a modern state and it was this that saved it from defeat when Hitler invaded in 1941. This was because it had enough material to make ammunition and artillery. Without these five year plans Russia would surely have lost the battle. Though Stalin was a dictator and was widely feared it was he who helped Russia rise. 1,759 words in total Abdul Mufti History Coursework 1 ...read more.