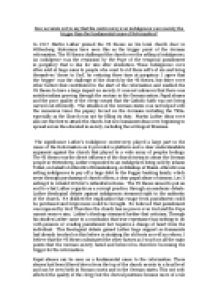 How accurate is it to say that the controversy over indulgences were merely the trigger than the fundamental cause of Reformation?

﻿How accurate is it to say that the controversy over indulgences were merely the trigger than the fundamental cause of Reformation? In 1517 Martin Luther pinned the 95 theses on his local church door in Wittenberg. Historians have seen this as the trigger point of the German reformation. The 95 theses challenged the church over the selling of indulgences. An indulgence was the remission by the Pope of the temporal punishment in purgatory that is due for sins after absolution. These Indulgences were often sold at huge sums to people who want to rid them self?s of sin and bring themselves ?closer to God?, by reducing there time at purgatory. I agree that the ?trigger? was the challenge of the church by the 95 theses, but there were other factors that contributed to the start of the reformation and enabled the 95 theses to have a large impact on society. It was not unknown that there was anticlericalism growing through the century in the German nation. Papal abuses and the poor quality of the clergy meant that the Catholic faith was not being carried out efficiently. ...read more.

Alexander VI (1492-1503) led a scandalous personal life as well as committing multiple acts of simony and involving himself in political matters outside the papacy. Julius II (1503-1513) known as the ?Warrior Pope? can be seen as a pope who was engrossed in power as he tries to expand papal lands. Leo X (1513-1521) can be seen as a pope who lavishes in Rome on the German taxpayers money especially to build St Peters. These popes created a German hatred that can be stemmed from generations before, especially as the Popes were increasingly from the same family and Italian, where deep routes of hatred lie between the Germans. I believe that the papal abuses had always been seen in the papacy but the scale in the sixteenth century was unprecedented and the moving away from religious intentions to political was become far more provident. The Papal abuses were not limited to Popes; simony was rife in Germany as seen by Albrecht of Brandenburg. This meant that the new church posts were being taken up by uneducated rich people who would be constantly absent and often own multiple positions. ...read more.

Humanists can be seen as important in helping to provide Luther with his tools, such as translations in the bible as well as providing vital support and responses to his ideas, particularly in the early stage, showing that Luther was a voice through which other people would build upon. In conclusion I believe that the Indulgence controversy was the trigger of the reformation where so much tension between German people and the church had occurred. The indulgence controversy cannot be seen as a cause as it was an event caused by the factors explained. These factors can be seen as the fundamental causes of the reformation, many which had stemmed back generations such as clerical and papal abuses; taxation and poor educated clergy had been building up. The indulgence controversy was just bringing those factors in light. I believe that it is accurate to say that the 95 theses and the indulgences was a trigger. Luther was one of the first people to openly critises the church openly in Germany. It was the first stepping-stone that sparked of the revolution, but it would the way the church handled the situation and the support Luther would gain that would enable others triggers such Luthers other theological debates to continue. ...read more.