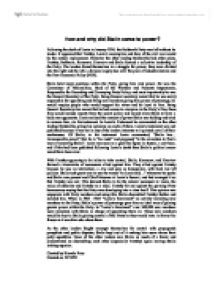 How and why did Stalin come to power?

How and why did Stalin come to power? Following the death of Lenin in January 1924, the Bolshevik Party was left without its leader. It appeared that Trotsky, Lenin's accomplice and hero of the civil war would be the natural replacement. However the other leading Bolsheviks had other plans, Trotsky, Bukharin, Kamenev, Zinoviev and Stalin formed a collective leadership of the Party. The leaders found themselves in a struggle for power; they were divided into the right and the left, a division largely due over the pace of industrialisation and the New Economic Policy (NEP). Stalin held many positions within the Party, giving him vast power. He was the Commissar of Nationalities, Head of the Workers and Peasants Inspectorate, Responsible for Recording and Conveying Party Policy, and most importantly he was the General Secretary of the Party. Being General secretary meant that he was solely responsible for appointing and firing new members giving him power of patronage, he would employ people who would support his views and be loyal to him. ...read more.

In "Lenin's Enrolment" over 500,000 new members were recruited, with Stalin in charge of appointing them all. These new members would be key to Stalin gaining control of the Party as they would vote in favour his favour as it was him who chose them. As the other leaders fought amongst themselves for control with propaganda pamphlets and public disputes, Stalin kept out of it making him seem above their petty squabbles. None of the other leaders saw Stalin as much of a threat and concentrated on discrediting each other (especially Trotsky) again leaving Stalin looking superior. By 1926 Trotsky had formed the "United Opposition" with Zinoviev and Kamenev representing the Left of the Party. They believed that the NEP, allowing peasants to sell surplus food in a similar fashion to capitalism, was a betrayal of the revolution and that it should be discontinued, as it was only a temporary measure to begin with. Stalin opposed this and using his power of patronage and loyal support to out vote them in the Politburo defeated them. ...read more.

Stalin used his power and loyal support in the Party to out vote the right. In 1929 members of the Right Opposition were identified and withdrawn from their posts in the Party except for Rykov, who remained as Head of the Government. Stalin ruthlessly eliminated the other members of the collective leadership leaving him in sole command of Russia. First he defeated the left with arguments from the right and then he defeated the right with arguments from the left, this shows his interests in policy were more concerned with eliminating his rivals as opposed to his own political beliefs. He used his power of patronage to develop a politburo that would vote in his favour and rose to become leader with the backing of those he had personally employed. Trotsky, who was the favourite to be leading the country made too many mistakes, he should have insisted on "Lenin's Testament" being published. By mid 1929 Stalin was free to implement his policies of industrialisation under his "Five Year Plan". Stalin's competitors underestimated him and his ability with mundane tasks that caused Lenin to label him the "Grey Blur" allowed him to scheme the defeat of his equals and take control. Created by Ricardo Price Created on 12/11/02 ...read more.