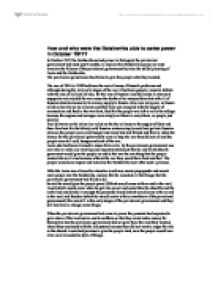 How and why were the Bolsheviks able to seize power in October 1917?

How and why were the Bolsheviks able to seize power in October 1917? In October 1917 the Bolsheviks seized power in Petrograd, the provisional government had lsted just 8 months, to explain this Bolshevik success we must examine the failures of the provisional government but also the skilful planning of Lenin and the Bolsheviks. The provisional government had failed to give the people what they wanted. The war of 1914 to 1918 had been the root of many of Russia's problems and although during the very early stages of the war it had been popular, massive defeats with the loss of millions of men, for the loss of Russian land had made it extremely unpopular not only did the war cause the deaths of so many soldiers but with all of Russias attention turned to its armies, supply to Russia cities was very poor, as Russia relied so heavily on its railways and they were pre-occupied with the supply of ammunition and food to the war front, food for the people was left ...read more.

Bolsheviks threw down their weapons and gave them to the Red Guards they then marched onto the Winter Palace and the seat of the provisional governement Bolsheviks sailors who had commendeered the Russian the warship the Aurora fired blank shells at the winter palace and the Red Guards stormed the gates they met very little resistance from the womens brigade and cadets that guarded the palace and took control of the seat of government. The people were sick of the provisional government which had done nothing since it got into power and thought that the Bolsheviks would be a much better choice because they would give the people what they wanted the Bolsheviks were now in control of the seat of government further affirming their authority however there was a long road ahead before they would be in control of the rest of Russia. They had seized power basically because they had promised to do what the provisional government would do and they had the guts to follow their revolution through to the end. ...read more.