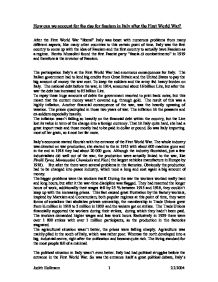 How can we account for the rise of fascism in Italy after the First World War?

How can we account for the rise for fascism in Italy after the First World War? After the First World War "liberal" Italy was beset with numerous problems from many different aspects, like many other countries to this certain point of time. Italy was the first country to come up with the idea of Fascism and the first country to actually have Fascism as a regime. Benito Mussolini found the first Fascist party "fascia di combattimento" in 1919 and therefore is the inventor of Fascism. The participation Italy's at the First World War had enormous consequences for Italy. The Italian government had to lend big credits from Great Britain and the United States to pay the big amount of money the war cost. To keep the soldiers and the army fed heavy burden on Italy. The national debt before the war, in 1914, amounted about 16 billion Lire, but after the war the debt has increased to 85 billion Lire. To repay these huge amounts of debts the government resorted to print bank notes, but this meant that the current money wasn't covered e.g. through gold. The result of this was a highly inflation. Another financial consequence of the war, was the heavily uprasing of taxation. The prices quadrupled in those two years of war. ...read more.

AT the end of World War One, the regime was blamed for the conduct in the war and for the failure of achieving territorial profit. The support of the Italian population, towards the entrance in the war, had been achieved through the desire to win back the "Italia Irredenta" from the Austro-Hungarian Empire. The Italians just got Trentino, South Tyrol and Istria as a territorial achievement. Although they gained all this land, the Italians still felt cheated, because of the promises made to them through the Treaty of London (Art. 4, Treaty of Peace). So the regime was widely condemned for this. The government also had to fight with anarchism, syndicalism and communism, additionally the massive strikes of the factory workers, all those contributed to weaken to basis of the government and the idea of democracy. So came and went five coalition governments between the armistice in 1918 and the Fascist coup in 1922. None of them were popular with the Italian population and none of them seemed to stabilize the economy or to banish the threat of revolutions. The governments tried to stop the strikes in a conventional way that means with the stake of police and military but they failed. ...read more.

The factory owners supported Mussolini, because he promised to end the strikes, which damaged the economy and therefore costs a lot of money. Because of this, the Fascist party had much more money than other parties. For example Fiat, which did quite well out of the war, supported Mussolini financially. The support of the peasants gained Mussolini through their unsatisfaction with the current political situation and their desperateness and Mussolini's promise for something new and a betterment of the economic. Military support gained he with the view of a state of law and order, which always includes the use of military and police and they expected a financial betterment and therefore a better technology. The main support brought him the promise to re-establishment of law and order and therewith the end of the civil war similar circumstances in Italy. When you look at the unrest situation in post-war Italy you'll notice it was a divided nation with an angry public force inside. Italy was heading for change it was just a matter of how and how long. Nobody did really know what Fascism was about and what it was turning into; it just seemed to be the perfect answer for all struggles. Therefore the account for the rise of Fascism is quite reasonable and understandable. 1 Judith Hollmann 2.2.2004 ...read more.