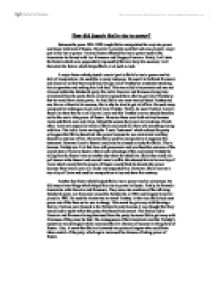 How did Joseph Stalin rise to power?

How did Joseph Stalin rise to power? Between the years 1924-1928 Joseph Stalin manipulated his way into power and hence took hold of Russia. However it could be said that luck also played a major part in his rise to power. Various factors affected his rise to power such as the triumvirate he formed with Lev Kamenev and Gregory Zinoviev. Firstly, I will state the factors which were purposefully imposed by Stalin to help him succeed, I will then state the factors which helped Stalin a lot such as luck. A major factor which played a crucial part in Stalin's rise to power was his skill of manipulation. He used this in many instances. He used it to befriend Kamenev and Zinoviev so that they would help him get rid of Trotsky by constantly attacking him in speeches and making him look bad. This was called a triumvirate and was not allowed within the Bolshevik party, this led to Zinoviev and Kamenev being later eliminated from the party. Stalin cleverly exposed them after he got rid of Trotsky so that he would have more power. At first, Stalin was most worried about Trotsky and saw him as a threat to his success, this is why he tried to get rid of him. He used many manipulative techniques to get rid of Leon Trotsky. ...read more.

Also, Stalin used his cleverness and his tactical manipulation to again tarnish Trotsky's reputation. He did this at Lenin's funeral. On 21 January 1924 Vladimir Lenin died. At this time Trotsky was ill with pneumonia so he didn't fully know about the details of Lenin's funeral. Stalin saw this as an opportunity to mislead Trotsky so he told him the wrong date for the funeral. Stalin then carried Lenin's coffin, which made it look like him and Lenin were close friends. He also spoke badly of Trotsky since he never attended the funeral. This dented Trotsky's reputation but boosted Stalin's as the people began to admire him thinking he was a friend of their loved ex-leader and a strong ruler. This shows how Stalin used manipulation to rise to success, however luck also played a major role in this scenario because if Trotsky was ill then it would have been unlikely that he would have missed the funeral and therefore Stalin would have been unable to speak bad stuff about him. As well as using manipulation and his intelligence Stalin was also very lucky, luck played a major role in his rise to power in Russia. Firstly, even though what Stalin did at Lenin's funeral was very clever it wouldn't have happened if Trotsky was not ill because he would have then been able to attend the funeral and hence Stalin would have then been unable to say that Trotsky is a bad man because he never attended. ...read more.

However, even though Stalin had some luck because people began to see him as a strong leader, he also manipulated the situation by taking full advantage of the vulnerability the Russian people felt. He exploited the fact they were morally weak and desperate for a strong leader to replace Lenin. Thus, Stalin was lucky but also used his manipulative skills to help him. To conclude, I believe that the two main factors in Stalin's rise to power in Russia between the years of 1924 - 28 were his ability to manipulate and a lot of luck. His capability to manipulate his political opponents and certain situations were decisive in his rise to power. This can be shown by the combination of manipulation and luck which resulted in the damage of Trotsky's reputation as a result of what happened at Lenin's funeral where Stalin manipulated Trotsky by misleading him about the date of the funeral and then attacking him in a speech. Also, an incident of manipulation and luck can also be shown by when Stalin used his manipulation to eliminate Kamenev, Zinoviev and Trotsky from his political party. He did this by using Kamenev and Zinoviev to eliminate Trotsky then eliminating Trotsky himself. Therefore, I believe that Stalin rose to success by using his ability to manipulate, however I also believe that luck also played a major role in his rise to power. ...read more.