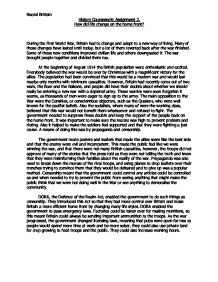 How did life change on the home front?

History Coursework: Assignment 2. How did life change on the home front? During the First World War, Britain had to change and adapt to a new way of living. Many of those changes have lasted until today, but a lot of them reverted back after the war finished. Some of these new conditions improved civilian life and others downgraded it. The war brought people together and divided them too. At the beginning of August 1914 the British population were enthusiastic and excited. Everybody believed the war would be over by Christmas with a magnificent victory for the allies. The population had been convinced that this would be a modern war and would last maybe only months with minimum casualties. However, Britain had recently come out of two wars, the Boer and the Balkans, and people did have their doubts about whether we should really be entering a new war with a depleted army. These worries were soon forgotten it seems, as thousands of men were eager to sign up to the army. The main opposition to the War were the Conshies, or conscientious objectors, such as the Quakers, who were well known for the pacifist beliefs. ...read more.

Women became factory and industrial workers, bus conductors, mechanics and many more enrolled as nurses. They had a new lease of life, and it gave them the incentive to push for greater things. For example, women began campaigning for the vote. Many politicians expected this, as it was clear that after they had been given the opportunity to do something, they would want to move on to the next step. After demonstrating several times, women finally got the vote in 1917, even though only women over 30 could vote, it made them feel more equal to men which is what they wanted most of all. Women's attitudes changed too, they were more confidant and they felt that they could stand up for themselves better. Men looked upon them in a different light, as they could see that women could do the hard manual jobs that they used to do, and many could do it more efficiently too! In 1919 a lot more professions became available as well. However, I do not believe the war brought about any long lasting changes for them. As soon as the war was over, the men came back and wanted their old jobs again, so the women had no choice but to give them up. ...read more.

The inhabitants of Great Britain were determined to pull through and were determined to get through. This sudden surge of morale caused Germany to call off the offensive, as they realised that Britain could not be invaded or be dispirited. Many things changed between 1914 and 1918. Women had a new lease of life when the men went off to war and they had a chance to show what they could do. However, when the war was over the soldiers came back and wanted their jobs again and the women were forced back into their homes. Most women were not happy about that as they were not getting any income and they had enjoyed what they had been doing. The change for women was more short term; apart from the fact that now they could vote. So in one sense, that introduced a large degree of change. There was also a new sense of community, as Britain began a new life again. Everybody had been through the war, everybody had been through the same thing and most felt the same. A lot of people had losses to grieve over, and it was easier to cope with if they had people around them who were going through the same thing. Not only did the allies end up winning the war in Europe, but they had won the war at home too. Naomi Brittain ...read more.