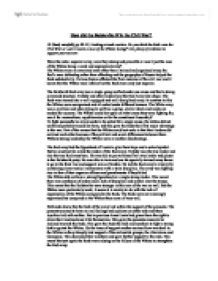 How did the Bolsheviks Win the Civil War?

How did the Bolsheviks Win the Civil War? 10. Study carefully pp.90-91, Looking at each section. Do you think the Reds won the Civil War or were it more a case of the Whites losing? Use plenty of evidence to support your answer. Were the reds a superior army, were they strong and powerful or was it just the case of the Whites being a weak and unprepared army? The Whites were an oversized mob rather than a trained and organised army, the Red's were defending rather than offending and the geography of Russia helped the Reds substantially. Various factors effected the final outcome of the civil war and it seems that the Whites were inferior but the Reds were only just superior. The Bolshevik Red army was a single group unified under one cause and had a strong command structure. Trotsky and other leaders beat the Red Army into shape. The Reds were turned into a well-equipped and well-disciplined army. In contrast to this the Whites were unorganised and all united under different banners. ...read more.

He led the Red army to victory by combining clever tactical manoeuvres with a strict discipline. The army was fighting also in fear of their superior officers and punishments if they failed. The Whites did not have a strong figurehead or a single strong leader. This meant there was confusion of orders and a lack of discipline and control over the troops. This meant that the Bolsheviks were stronger in this area of the war as well. But the Whites were particularly weak, it seems it is mainly to do with the lack of organisation of the Whites compared to the Reds. The Reds were not amazingly supervised but compared to the Whites they come of very well. Both sides knew that the bulk of the army lied within the support of the peasants. The peasants seemed to have no real feelings and opinions on either side and there loyalties laid with neither. But in previous times Lenin had given them the right to claim their land and own it for themselves. ...read more.

The Reds had advantages that were more than being a better or stronger army. Foreign intervention could have and should have been the saviour of the Whites as it would have armed their forces and increased numbers ten fold but this was not to be. Another bonus for the Reds as the foreign efforts was weak and half-hearted. It also provided the Bolsheviks with tactical propaganda to do with how the Whites were 'selling out Russia and the Reds were fighting for their company'. The Foreign support should have helped the Whites but in the end the Reds gained more from the Propaganda than the Whites did from the interventions. Over all it is apparent that the Whites were not only suffering from not being a well structured army or even political group but also various factors that were out of their control were influencing their failure. The Reds were stronger but they were also able to gain strength and win by taking advantage of the Whites failures. I feel it is definitely more of the case that the Whites failed as an army rather than a clear victory by the Reds. ...read more.