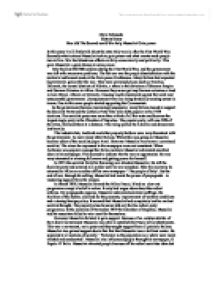 How did The Second world War help Mussolini Gain power?

Marie Edmunds History Essay How did The Second world War help Mussolini Gain power In this essay I will firstly talk about the state Italy was in after the First World War. Secondly what actions Mussolini took to gain power and what events made people turn to him. War had disastrous effects on Italy economically and politically. This gave Mussolini a great chance to seize power. Italy had lost 460'000 soldiers during the First World War, and the government was left with many new problems. The fist one was the people dissatisfaction with the territorial settlement made at the Paris peace Conference. Many Italians had expected big territorial gains after the war. They were promised places such as Trentino, Dalmatia, the coastal districts of Albania, a share in the divisions of Ottoman Empire and German Colonies in Africa. However they never got any German colonies or land in Asia Minor, Albania or Dalmatia. Causing much resentment against the weak and unsuccessful government. Unemployment was also rising drastically causing unrest in towns. Due to this some people started supporting the Communists As the government became increasingly unpopular, many Italians turned to support the Socialist Party and the Catholic Party who were both popular in the 1919 elections. ...read more.

However Mussolini did start to gain support. Because of ex-soldiers dislike of the Liberal Government Mussolini was able to establish the Fascio di Combattimento. This was a movement, not a party and they sought support from all patriotic Italians. Mussolini also gained support due to that fact that Mussolini was a brilliant orator. He appealed to all sections of society. ' Particular as the population as a whole were weak minded and uneducated'. Mussolini also influenced people through his newspaper, II Popolo D' Italia. Mussolini attracted people because off its radical socialists ideas but then soon changed its policy to one of extreme anti socialism and in April 1911 Fascists burnt the Avanti Offices. They also engaged in other acts of violence against the Socialists such as pouring caster oil over them and simply beating them up. Other fascist's squadrisms as well as Fascio Di Combattimento did this. Both of these were completely independent on Mussolini movement and Mussolini himself. By late 1920 Fascism had really taken off, attracting not just wealthy but the Bourgeoisie and also shareholders as well as the people who were hostile towards the socialist. ...read more.

It is interesting to note that the lack of unity within the liberal government finally brought about their downfall, as one of the leading men in the government at the time, Solandra asked the King specifically to offer Mussolini the job as Prime Minister simply because he wanted to prevent one of his liberal colleagues, Giolitti, from becoming it. In conclusion to this essay i Mussolini was able to come to power in 1922 primarily because of his ability to influence people, and because he could to intimidate them. Mussolini won support from key areas, such as the church, the monarchy and the economic elite and using this support to crush socialism. However there were many other factors that caused the Fascists rise to power in 1922. War is one of the main factors. The people disliked the government in both foreign and domestic affairs. The government failed to sort out the problems that were caused by war. The treat of a socialist revolution made many Italians desire for a strong government, which could impose law and order in the country, and Mussolini offered this. And finally the liberal government and King Victor Emmanuel feared Fascism less than Socialist revolution and they capitulated at the threat of a March on Rome. ...read more.