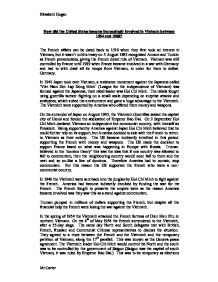 How did the United States become increasingly involved in Vietnam between 1954 and 1968?

How did the United States become increasingly involved in Vietnam between 1954 and 1968? The French affairs can be dated back to 1516 when they first took an interest in Vietnam, but it wasn't until a treaty on 5 August 1883 recognized Annam and Tonkin as French protectorates, giving the French direct rule of Vietnam. Vietnam was still controlled by France until 1939 when France became involved in a war with Germany and had to with draw all its troops from Vietnam, in order for them to defeat Germany. In 1941 Japan took over Vietnam, a resistance movement against the Japanese called 'Viet Nam Dot Lap Dong Minh' (League for the independence of Vietnam) was formed against the Japanese, their rebel leader was Hoi Chi Minh. The rebels fought using guerrilla tactics: fighting on a small scale depending on surprise attacks and ambushes, which suited the environment and gave a huge advantage to the Vietminh. The Vietminh were supported by America who offered them money and weapons. On the surrender of Japan on August 1945, the Vietminh Guerrillas seized the capital city of Hanoi and forced the abdication of Emperor Bao Dai. ...read more.

So Vietnam stayed split in two. In 1959 in order for they're to be 'peace' in South Vietnam president Eisenhower poured in economical aid and modern weapons and sent in military advisors. By the time he had left the office in 1961 there were 685 advisors in Vietnam. This reflected the US fear of communism in the 1950's. where even support for currupt dictators was preferable to communism. By 1959 communist sympathises who had moved north after the partition of Vietnam began returning south in growing numbers. Called Vietcong, they began to carry out small attacks on US posts and in 1959 began their guerrilla attacks on the Diem government. In December 1961 President Kennedy significantly increased military assistance to Diem's government and the first U.S. troops consisting of 400-uniformed army personnel were sent in. Diem set up the A.R.V.N and the new president Kennedy gave $270 million to find them. Following this Kennedy sent 10000 advisors to help Diem. Kennedy's increased involvement because the communist North was winning against the South. Again the US did this for the wrong reasons they believed that the Vietminh were trying to take over Vietnam. ...read more.

From 1954 to 1968 the Americans became increasingly involved because of their fear, hatred and attempt to contain communism. The Americans first came involved by helping the French with financial aid, equipment and advice. After eight years the French had given up and withdrawn their troops from Vietnam. They became increasingly involved when the prospect of communism endangered their 'Back yard'. There was a failure by the US in which it miss understood the conflict that was happening in Vietnam. The US thought that the war was communism against nationalists, when it was really between colonialists and nationalists. The Americans saw that the Vietminh was led by a communist, and decided to side with the nationalists. Their complete and utter hate for communism let them enter the war for the complete wrong reasons. The majority of the Vietnamese people wanted a communist government, so the people of Vietnam were against the Americas decision in 'helping' them. The US kept on increasing involvement because the Vietcong seemed to always be winning; they believed that if they kept on pumping in more money, equipment and military aid they would eventually win the Vietcong. But they didn't take into account on the number of the Vietcong and their will for freedom. Elizabeth Hogan Mr Carter ...read more.