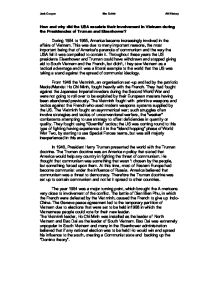 How did the USA escalate their involvement in Vietnam?

How and why did the USA escalate their involvement in Vietnam during the Presidencies of Truman and Eisenhower? During 1954 to 1965, America became increasingly involved in the affairs of Vietnam. This was due to many important reasons, the most important being that of America's paranoia of communism and the way the USA felt it was compelled to contain it. Throughout these years the US presidents Eisenhower and Truman could have withdrawn and stopped giving aid to South Vietnam and the French, but didn't, they saw Vietnam as a tactical advantage and it was a littoral example to the world that the US was taking a stand against the spread of communist ideology. From 1946 the Vietminh, an organisation set-up and led by the patriotic Maoist/Marxist Ho Chi Minh, fought heavily with the French. They had fought against the Japanese Imperial invaders during the Second World War and were not going to roll over to be exploited by their European masters having been abandoned previously. ...read more.

The year 1954 was a major turning point, which brought the Americans very close to involvement of the conflict. The battle of Dien Bien Phu, in which the French were defeated by the Vietminh, caused the French to give up Indo-China. The Geneva peace agreement led to the temporary partition of Vietnam due to elections that were set to be held in1956 in which the Vietnamese people could vote for their new leader. The Vietminh leader, Ho Chi Minh was installed as the leader of North Vietnam and Bao Dai as the leader of South Vietnam. Bao Dai was extremely unpopular in South Vietnam and many in the Eisenhower administration believed that if any national election was to be held Ho would win and spread his influence to the south, creating a Communist state and backing up the "Domino theory". The historical reputation of Dwight D. Eisenhower, war hero and thirty-fourth president of the United States sank to a low point after he left the White House in January 1961. ...read more.

They saw Eisenhower's conservative agenda as a program to benefit the privileged and the wealthy, a Republican reaction to the progress made under Democratic reformers. They ridiculed Eisenhower's efforts to achieve economic responsibility and decentralized government, claiming that these efforts were little more than a smokescreen covering the president's insensitivity to the needs of the less fortunate elements of American society. Eisenhower's foreign policy which had resulted in seven-and-a-half years of peace came in for somewhat less criticism. Nevertheless, many criticized Vice-president Nixon's emphasis on nuclear weapons and the doctrine of massive retaliation. Most of the criticisms, however, were directed at Eisenhower's supposed failure to pursue the cold war vigorously and successfully. Eisenhower's misguided efforts to balance the federal budget, it was said, had resulted in an inadequate military posture and an unwillingness to confront America's communist enemies in areas involving either conventional or guerrilla warfare. The whole situation and the USA's stance on Vietnam seems to be a mixture of paranoia of Communism, and a reluctance to enter another war. ?? ?? ?? ?? Jack Cooper Mrs Colvin AS History ...read more.