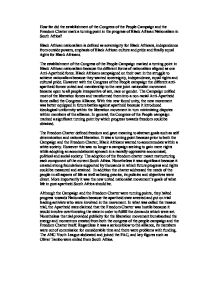 How far did the establishment of the Congress of the People Campaign and the Freedom Charter mark a turning point in the progress of Black African Nationalism in South Africa?

It was a turning point because prior to both the Campaign and the Freedom Charter, Black Africans wanted to accommodate within a white society. However this was no longer a campaign seeking to gain mere rights while adopting an accomdationist aproach in a racially oppressive economical, political and social society. The adoption of the freedom charter meant restructuring each component of the current South Africa. Nonetheless it was significant because it created strong foundations supported by thousands in which future progress and rights could be measured and attained In addition the charter addressed the needs of the people in all aspects of life as well as being precise, its policies and objectives were direct. ...read more.

The ANC Youth League abdicated and joined the PAC, and key figures such as Oliver Tambo were exiled from South Africa. In conclusion the Congress of the People Campaign and the Freedom Charter which followed were turning points in the struggle for nationalism because it was an alliance between Black Africans and other anti-apartheid forces. However despite their achievements the progress towards nationalism was stopped after the Apartheid state intervened. Though the Freedom Charter didn't achieve much at the time, it established standards by which future progress could be measured. This is evident as Nelson Mandela adopted most of the clauses of the Charter when he became president of South Africa. In this sense it was a turning point and it aided progress towards Black African Nationalism. ...read more.