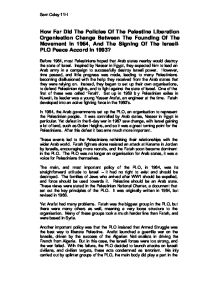 How Far Did The Policies Of The Palestine Liberation Organisation Change Between The Founding Of The Movement In 1964, And The Signing Of The Israeli-PLO Peace Accord In 1993?

How Far Did The Policies Of The Palestine Liberation Organisation Change Between The Founding Of The Movement In 1964, And The Signing Of The Israeli-PLO Peace Accord In 1993? Before 1964, most Palestinians hoped that Arab states nearby would destroy the state of Israel. Inspired by Nasser in Egypt, they expected him to lead an Arab army in a campaign to successfully destroy Israeli power. However, time passed, and little progress was made, leading to many Palestinians becoming disillusioned with the help they received from the Arab states that they were relying on. Instead, they began to set up their own organisations, to defend Palestinian rights, and to fight against the state of Israel. One of the first of these was called 'Fatah'. Set up in 1959 by Palestinian exiles in Kuwait, its leader was a young Yasser Arafat, an engineer at the time. Fatah developed into an active fighting force in the 1960's. In 1964, the Arab governments set up the PLO, an organisation to represent the Palestinian people. It was controlled by Arab states, Nasser in Egypt in particular. Yet defeat in the 6-day war in 1967 saw change, with Israel gaining a lot of land, such as Golan Heights, and so it was a great turning point for the Palestinians. ...read more.

In this case, the plans failed, as Israelis travelled 2000 miles, and freed the hostages, killing the Palestinians. Hijackings were thereafter less common, but other violence continued. These actions gained some support form outside the organisation, as many people admired the way that the Palestinians were resisting Israeli power. In 1974, the PLO was declared as the 'sole, legitimate representative of the Palestinian people. Arafat as leader was invited to speak to the UN in 1974, strengthening his position. The policies to this stage were working well. When, in 1970, Palestinians were forced to leave Jordan, after making it home of PLO operations, due to fighting and planning to over throw King Hussein, the PLO forces moved to Lebanon. From there, they launched regular attacks on northern Israel. The PLO also became very involved with Lebanese politics, and controlled large areas of the south of the country. With a huge split between people in Lebanon, poor and rich, Christian and Muslim, the PLO sided with the poor Shia Muslims of the south. Civil war began in 1975 in Lebanon, and the PLO joined the Shia Muslims in the war. In 1982 however, Israelis invaded Lebanon, and despite strong resistance, they forced out the PLO leaders by August, and moved far from Israel, to Tunisia. ...read more.

These massive changes that occurred between 1964 and 1988, may have been due to the fact that terrorism was not very successful, or perhaps that Arafat had other plans. There is support for both arguments. Terrorism was failing, and little progress being made with the use of violence. Divisions in the PLO also suggest that it was time for change. But evidence shows that Arafat may have used this agreement to his own advantage. In 1990/91, the Gulf War showed that they were still more than ready to work against the ideas of the UN, and that the agreement to accepting resolution 242 was very muddled. And despite agreeing to accept Israel as a state, arguments continued, and many still continued to reject Israel. Maybe this agreement was the first steps by Arafat to destroying Israel as many Israelis suggested. Therefore it is clear that there is both continuity, and change in the policies of the PLO. Change is evident between 1964 and 1988, with a revision of them in 1968 when the PLO became the voice for all Palestinians, but by 1993, the changes of 1988, and agreeing to the UN and US terms, seem to be overlooked by the PLO in some cases, suggesting that the PLO was still on course to try and destroy Israel, and the policies were very much the same as they were back in 1964, when they were first laid out by the organisation. Sam Coley 11H ...read more.