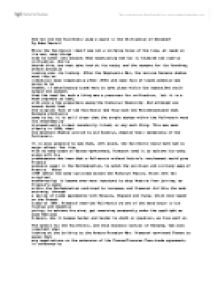 How far did the Zollverein play a apart in the Unification of Germany?

How far did the Zollverein play a apart in the Unification of Germany? By Adam Daniell While the Zollverein itself was not a unifying force of the time, at least on its own, many things must be taken into account when questioning how far it futhered the road to unification. And to decide this, one must take look at its roots, and the reasons for its founding, before actually looking over its history. After the Napoleonic War, the various Germans states went into an industrial boom (especially after 1850) and some form of trade cohesion was going to be needed, if satsifactory trade were to take place within the states.One could hazard the comment that the need for such a thing was a precursor for unification, but it is a weak argument at best, with only a few supporters among the Historial Community. And although one cannot doubt that the original form of the Zollverein was very much the Kleindeutchland that Germany eventually came to ...read more.

Bismarck used the Zollverein as one of the many tools in his foreign and domestic policy, to achieve his aims, yet remaining constantly under the spotlight as some National Liberal, who it became harder and harder to doubt or question, as time went on. The battle for the Zollverein, and thus economic control of Germany, was also important when looking at the build-up to the Austro-Prussian War. Bismarck convinced France to agree that any negotiations on the extension of the Franco/Prussian Free-trade agreement, in reference to the smaller states, would have to go through Berlin. This, Bismarck thought, would increase their dependence on Prussia, and thus allow Bismarck to renegotiate terms when the Zollverein was renewed in 1865, getting rid of the smaller states' veto powers and suchlike. The other German states voted him out on this, making it impossible for him to use the Franco/Prussian treaty against them, and thus he switched tack. ...read more.

were annexed or heavily fined at the end of it all. And the Southern states, although allowed to keep their independence, were forced to join the Zollverein, thus increasing Prussia's overall power within the Confederation - one could even go as far to say that it was the Zollverein that, indirectly, knocked Austria out of the running for leadership of Germany. In conclusion, I don't think one can over-estimate or under estimate the extent to which the Zollverein unified Germany. It certainly played a part in drawing up the future extents of the German Empire, and allowed for greater intergration within the separate states, but its years of most effectiveness ended in 1865, after the addition of the Southern states, who returned members of the Zollverein Parliament who were ready to rebuff any of Prussia's plans. It was not only that, but also the fact that Bismarck found other tools to use to his advantage (such as the Ems telegram, to steer Prussia and Germany in the direction he wanted). ...read more.