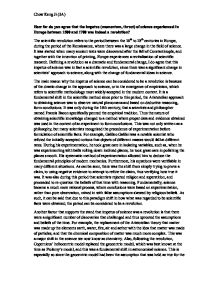 How far do you agree that the impetus (momentum, thrust) of science experienced in Europe between 1500 and 1700 was indeed a revolution?

How far do you agree that the impetus (momentum, thrust) of science experienced in Europe between 1500 and 1700 was indeed a revolution? The scientific revolution refers to the period between the 16th to 18th centuries in Europe, during the period of the Renaissance, where there was a large change in the field of science. It was started when many ancient texts were discovered after the fall of Constantinople, and together with the invention of printing, Europe experiences a revitalisation of scientific research. Defining a revolution as a dramatic and fundamental change, I do agree that this impetus of science was in fact a scientific revolution, since there was a significant change in scientists' approach to science, along with the change of fundamental ideas in science. The main reason why the impetus of science can be considered to be a revolution is because of the drastic change in the approach to science, or in the emergence of empiricism, which refers to scientific methodology most widely accepted in the modern context. It is a fundamental shift in the scientific method since prior to this period, the Aristotelian approach to obtaining science was to observe natural phenomena and based on deductive reasoning, form conclusions. It was only during the 16th century, that a scientists and philosopher named Francis Bacon specifically penned the empirical tradition. Thus the nature of obtaining scientific knowledge changed to a method where proper data and evidence obtained was used in the context of an experiment to form conclusions. ...read more.

It can be seen that these discoveries that have been proven to be true based on modern technology, are not only further developments in science, but actually fundamental changes in the widely accepted ideas. Such mindset shifts mark a major change during the period, uprooting many ideas that were originally thought to be true by the Greeks, thus showing that the period was truly a revolution. However, it can also be said that the impetus of science was not truly a revolution based on the fact that many scientists used the knowledge that was written down in the ancient texts by the Greek. This brings in the argument that while there was significant change in the ideas, many of the ideas were brought about by either adding to what was already understood, or using the original knowledge as a framework for critiquing and thus come up with new ideas, thus the argument that there is actually no significant change, but a review and continuity of earlier known knowledge. In many cases, scientists of the revolution had read the ancient antecedents of their own ideas, and adapted them to their own use. For example, it is accepted that Copernicus followed the outline and method used by Ptolemy, and adapted the geocentric model of the Maragheh in a heliocentric context when constructing his model of the universe. Newton had also admitted in a revised edition of his Principia, that his laws of gravity and his first law of motion were adapted from the writings of other historical figures. ...read more.

In this way, the origin of the ideas, as long as the new idea is significantly different from the original (flawed) understanding, becomes irrelevant. Even as the two perspectives are in conflict if using the extent of change in knowledge as a factor, the primary factor, I believe, that can be used to justify that the period was indeed a revolution is the emergence of empiricism. It is difficult to fully justify the extent at which specific ideas and findings during the period could be considered revolutionary, but it is easy to see that during the period, the fundamental method or approach to science was changed, or least used by scientists to an extent never seen in European science before the scientific revolution. It is on the basis that the philosophy and methodology of science itself has changed, that we can consider the period as revolutionary to the practice of science. In fact, empiricism, what we know now more as the scientific method, has been become so well accepted by modern institutions that we can begin to doubt the extent at which the people who developed ideas and obtained knowledge of the natural world before the rise of empiricism, could be considered to be truly practicing science. As such, this paradigm shift is the crucial factor is enabling us to understand that the impetus of science was indeed a scientific revolution, for the change was science in itself, not just scientific knowledge. ?? ?? ?? ?? Chow Keng Ji (3A) ...read more.