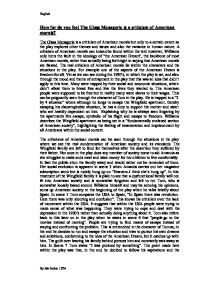 How far do you feel The Glass Menagerie is a criticism of American morals?

How far do you feel The Glass Menagerie is a criticism of American morals? The Glass Menagerie is a criticism of American morals but only to a certain extent as the play explores other themes and issues and also the variance in human nature. A criticism of American morals can indeed be found within the text however, Williams only hints the fault in the ideology of "the American Dream", the backbone of most American morals, rather than actually being forthright in saying that American morals are flawed. The real criticism of American morals lie within the characters and the situations in the play. For example one of the aspects of the American Dream is freedom for all. Yet as we can see during the 1930's, in which the play is set, and also through the mood and theme of entrapment in the play that this was an idea that didn't apply to this time. Many were trapped by their social and economic situations, which didn't allow them to break free and live the lives they wanted to. The American people were supposed to be free but in reality many were slaves to their wages. This can be poignantly seen through the character of Tom in the play. He is trapped in a "2 by 4 situation" where although he longs to escape the Wingfield apartment, thereby escaping his claustrophobic situation, he has a duty to support his mother and sister who are heavily dependant on him. ...read more.

This is shown in Scene 5 when Tom states that "across the alley from us was the Paradise Dance Hall" which served as a means of escapism for people of his as it provided "compensation for lives that passed like mine". Tom declares the Dance Hall "flooded the world with brief deceptive rainbows," describing the temporary illusion that most sought to escape from their pathetic existences. He dwelled on this so much that he eventually wanted to escape it and elude this, which he did. The criticism here is that Tom followed the American Dream, by doing so one ends up selfish and almost hedonistic, not caring about family or society, only ones self. More underlying criticism in the play is with the character of Mr. Wingfield. He pursued his own objectives and desires (part of the American Dream) and ignored his responsibilities resulting in the desertion of the Wingfield family unit. The American society places so much emphasis on the father figure in the family that it made it almost impossible in the play for the Wingfields to function as a normal family. The family seem to have a sense of isolation because of the absence of a patriarchal figure. "a world of reality that we were somehow set apart from" (Scene 1). ...read more.

Jim also fits in with the theme of illusion and reality. He seems to be the hope and light of the Wingfields yet he is not the charming fianc� Amanda wants him to be as he is already engaged. He is built up o be somewhat resembling a hero yet the reality is disappointing. "I hoped when I was going to high school that I would be further along at this time". Even Jim himself has realised that he has not succeeded as well as he would have liked to, yet his attitude is unchanged. Outwardly he seems to be the saviour to the Wingfields yet when he leaves he ends up painfully reminding the Wingfields of their dire situation. Williams deliberately only touches upon what may be boiling away beneath the surface of the characters and American society. Williams doesn't criticize American morals blatantly but does it through the subtle use of symbols and situations the characters are in and he mainly leaves it to the audience to do the full criticising. The use of screen icons and legends emphasize the message that Williams is trying to suggest, the emotions of desertion, abandonment and entrapment that the characters feel within the play. The character of Tom does criticize America for its lack of movement but audiences have to explore what Williams may be conveying in order to see where the criticisms of American morals lie. English By Mo Rubie 12T4 ...read more.