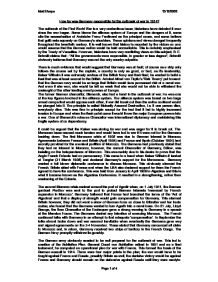 How far was Germany responsible for the outbreak of war in 1914?

How far was Germany responsible for the outbreak of war in 1914? The outbreak of the First World War is a very contentious issue; historians have debated it ever since the war began. Some blame the alliance system of Europe and the dangers of it, some cite the assassination of Archduke Franz Ferdinand as the principal cause, and some believe that guilt rests squarely on Germany's shoulders. These opinions and views changed frequently throughout the twentieth century. It is well known that history is recorded by the victors so one would assume that the German nation would be held accountable. This is certainly emphasised by the Treaty of Versailles. However, historians have very conflicting views on this subject, B. E. Schmitt claims that : "All the governments were responsible, in greater or less degree", Schmitt obviously believes that Germany was not the only country culpable. There is much evidence that would suggest that Germany was at fault, of course as a ship only follows the course set by the captain, a country is only as good, or bad, as it's leadership. Kaiser Wilhelm II was extremely envious of the British Navy and their fleet, he wanted to build a fleet that was at least second to the British. Admiral Alfred von Tirpitz's 'Risk Theory' put forward that the German navy would be so large that Britain would face permanent risk of a naval war. ...read more.

Bismarck's alliance system depended on the threat of mutually assured destruction so Germany needed to appear strong in order to deter attackers. She also needed to present a strong image to her allies to ensure that they would be capable of an armed conflict if it were to happen. As Bebel put it in 1913 "Nobody in Germany wanted to expose a defenceless and weak Fatherland to foreign attack" After the Franco Prussian war of 1870, the country of Germany was formed. Stirred by national loyalty, the south German states joined forces behind Prussia, whose seasoned armies conquered the disorganized French at Sedan and, after a long siege, took Paris in 1871. With these events Bismarck convinced the south German states that Prussian hegemony was inevitable. At Versailles in 1871 he persuaded a reluctant William to take a new title as Head of the German Empire, the Second Reich. Largely to please the merchant class, Bismarck consented to Germany's acquiring colonies in Africa and the Pacific. Germany found its colonies valuable chiefly for prestige, however. The German people were very keen on the idea of a 'place in the sun'; they wanted foreign colonies not only for expansion of their borders but to demonstrate to the world that they were powerful. Most historians agree that the flash point for the First World War was the assassination of the Austrian Archduke Franz Ferdinand by Gavrilo Princip in June 1914. ...read more.

It is interesting to note that the Treaty of 1839 which established the neutrality of Belgium gave the guarantor countries the right to intervene to defend the neutrality of Belgium, however there was no written obligation that forced intervention. The only obligation was moral, what sort of image would Britain be presenting to her allies if she allowed her allies to be invaded? B.E. Schmitt introduces his pamphlet with the sentence 'The First World War broke out suddenly and unrepentantly in midsummer 1914'. This remark is heavily contradicted by James Joll, "As a French observer in 1912 put it, ' how many times in the last two years have we heard people repeat "Better war than this perpetual waiting!" In this wish there is no bitterness, but a secret hope.' " Joll obviously believes that the majority of Europe knew war was coming and was likely to be inevitable. However as soon as one power, in order to reinforce its stance, began to mobilise, its action made military men everywhere nervous as no general staff was willing to allow a rival to get a head start. As the German chancellor said "Once the dice were set rolling, nothing could stop them. This is quite a popular view of the war, that it was inevitable when the short and long term causes combined with the flash point. Many historians have written about this subject throughout the twentieth century and none have been able to sum up the simplicity of the outbreak of war as well as Lloyd George himself; "We all muddled into war". ...read more.