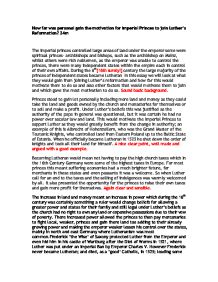 How far was personal gain the motivation for Imperial Princes to join Luthers Reformation? 24m

How far was personal gain the motivation for Imperial Princes to join Luther's Reformation? 24m The imperial princes controlled large areas of land under the emperor some were spiritual princes- archbishops and bishops, such as the archbishop on Mainz, whilst others were rich noblemen, as the emperor was unable to control the princes, there were many independent states within the empire each in control of their own affairs. During the 6th[16th surely!] century the large majority of the princes of independent states became Lutheran In this essay we will look at what they would gain from joining Luther's reformation and how far this would motivate them to do so and also other factors that would motivate them to join and which gave the most motivation to do so. Sound basic background. Princes stood to gain lot personally including more land and money as they could take the land and goods owned by the church and monasteries for themselves or to sell and make a profit. Under Luther's beliefs this was justified as the authority of the pope in general was questioned, but it was certain he had no power over secular law and land. ...read more.

and even hid him in his castle of Wartburg after the Diet of Worms in 1521, where Luther was put under an Imperial Ban by Emperor Charles V. However Frederick never became Lutheran; and died, as a 'good' Catholic, in 1525; leading some historians to think that he had used Luther, for his own personal gain; as a political tool to maintain his power and position over the Holy Roman Emperor. however some people may say that personal gain was not the motivation, or at least the main motivation, for Imperial Princes to convert to Lutheranism. Many converted simply because they had a genuine belief in his ideas. across Germany people were switching to Luther's ideas, seeing more faults in the Catholic Church in Germany. For example, the abuses within the Catholic Church, and in particular, the selling of indulgences throughout Germany that led to the building of a new St. Peter's Church in Rome Careful the Church argued that indulgences were perfectly fine, Lutherans argued they were an abuse. You need to say that many germans viewed them as an abuse and Luther's opposition to them won him converts. ...read more.

Not wanting to cause arguments and disputes between neighboring Lutheran States. And gaining more independence by going against the emperor, who was a strong catholic, which was what most imperial states wanted. In conclusion I feel that although some of the Imperial Princes may have supported Luther for their own reasons including genuine belief. Many of them will have sought some kind of personal gain out of showing their support for Martin Luther and his Reformation of the Catholic Church in Europe. Although personal gain may not have been the only reason it I likely to be high on any rulers list that did reform if not at the top. I'm not 100% convinced by this conclusion, it is not in enough depth to be conclusive. Overall a fine piece of work. You pick lots of relevant points and you give them lots of detailed explanation and examples. You show a deep knowledge and clear understanding of the period. A very good effort. TARGETS: * Your conclusions need to be in more depth to convince the examiner. Other than the conclusion this is a very good level 4, I will give you the top of the level. level 4, 21 marks. ...read more.