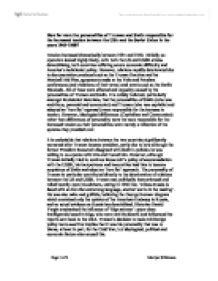 How far were the personalities of Truman and Stalin responsible for the increased tension between the USA and the Soviet Union in the years 1945-1950?

How far were the personalities of Truman and Stalin responsible for the increased tension between the USA and the Soviet Union in the years 1945-1950? Tension increased dramatically between 1945 and 1950. Initially co-operation looked highly likely, with both the US and USSR armies demobilising, both countries suffering severe economic difficulty and America's isolationist policy. However, relations rapidly deteriorated due to documentation produced such as the Truman Doctrine and the Marshall Aid Plan, agreements made at the Yalta and Potsdam conferences (and violations of their terms) and events such as the Berlin Blockade. All of these were affected and arguably caused by the personalities of Truman and Stalin. It is widely believed, particularly amongst Revisionist historians, that the personalities of Stalin (who was ambitious, paranoid and communist) and Truman (who was capitalist and adopted an 'Iron fist' approach) were responsible for the increase in tension. However, ideological differences (Capitalism and Communism) rather than differences of personality were the most responsible for the increased tension as their personalities were merely a reflection of the systems they presided over. ...read more.

However, tension was already emerging as the Declaration on Liberated Europe alienated Russia as it was based on democracy (an American principle) and the reparations that Russia was to receive (10% of all zones) did not reflect her effort and sacrifices in the war. As the first conference was held agreements were made before Truman became President, this suggests that his personality was not to blame for the increased tension, as tension already existed and, due to the agreements made without him, was likely to increase. However, both countries violated the terms agreed in these conferences and as the decision to do this was by Stalin and Truman, which suggests that it their personalities may have been responsible to some degree. The US announced in May 1946 that the US would suspend reparation payments, which the USSR economy relied upon and violated terms previously agreed upon. The Soviets breached the Declaration on Liberated Europe through vote rigging, use of terror, delaying elections in Poland, Romania and Hungary and the 1948 coup d'�tat in Czechoslovakia. This confirmed Truman's views on Communism and acted as a catalyst for US policy becoming more assertive. ...read more.

The idea that ideological differences rather than Russia and America's leaders were to blame is further confirmed by the Chinese Revolution. The US considered themselves to be the 'guardian of China' and were their main trading partner and considered them essential for economic development. When China became communist, the US were offended and threatened, believing that China had become Communist due to Stalin's support for Mao and that it was part of Stalin's master plan for 'world domination'. To conclude, the personalities of Truman and Stalin did contribute towards the increased tension between the USA and the Soviet Union, but were the sole cause. The personalities of others besides Stalin and Truman were also arguably responsible: Historian D Donnelly emphasised how the previous President Roosevelt's optimism and weakness, as demonstrated by his failure to stand up to Stalin at the Yalta Conference, allowed Stalin to take advantage of the 'gullibility of the west'. Ultimately, the ideological differences between the two countries were responsible for the increased tension between the USA and USSR between 1945 and 1950, as the personalities of Truman and Stalin merely reflected the principles of the countries they presided over. ?? ?? ?? ?? Page 1 of 3 Marilyn Wilkinson ...read more.